I had this set to post, but forgot to actually schedule it, so Free Map Friday is now Slightly Delayed Free Map Saturday.  I was going through my old papers and came across this outdoor map for one of my Castles & Crusades campaign from many years ago.  Sadly, it's not nearly as entertaining as the player made dungeon maps from the same campaign. :-) 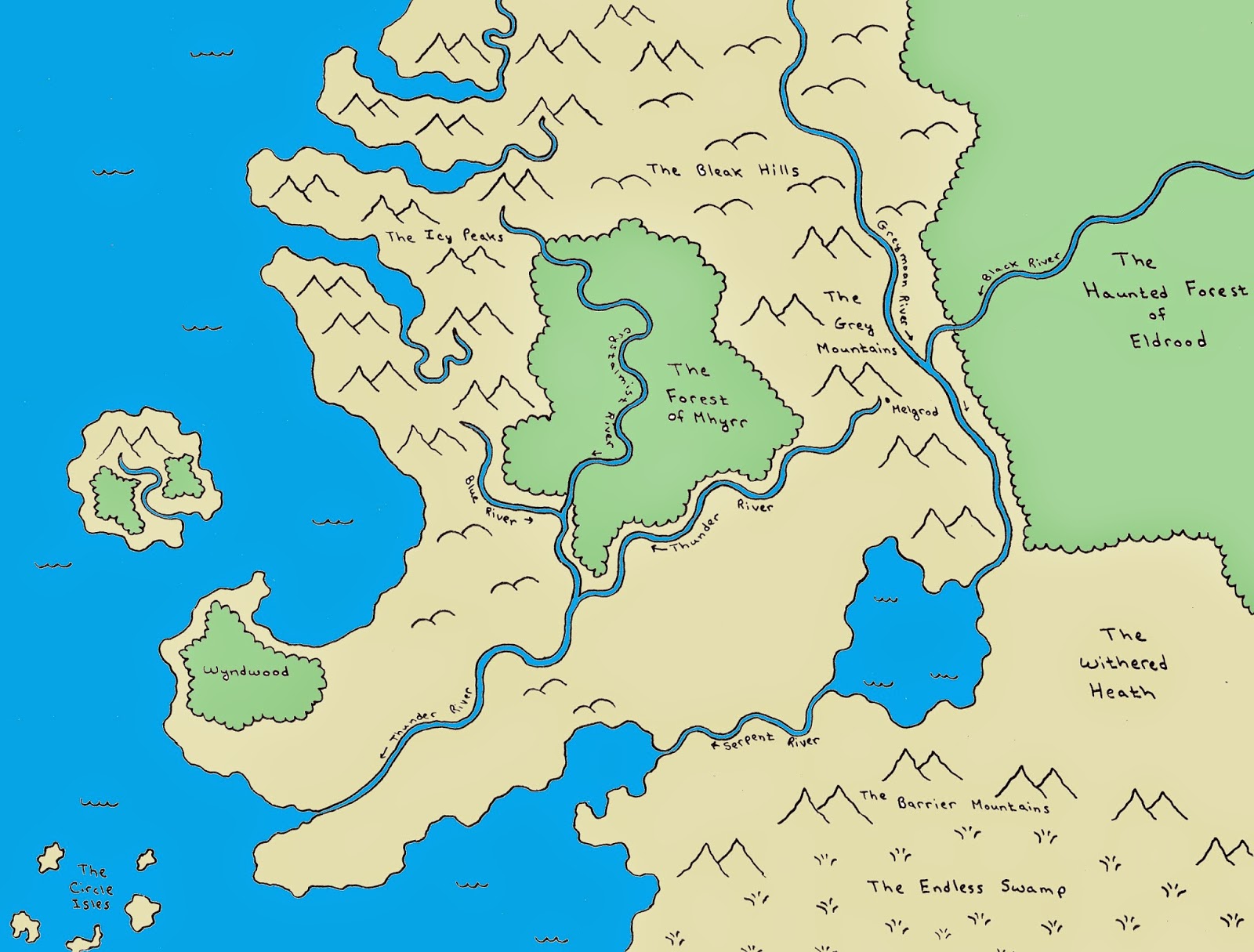 The map isn't complete, as my intent was to add cities and adventure sites as we went.  I've done some maps recently with Campaign Cartographer, and while it produces very nice results, I'm still a fan of hand drawn maps.
Posted by jrl755 at 4:45 PM No comments:

Weird Adventure Wednesday has rolled around once more.  This week's installment takes place in that time honored trope of fantasy, the maze.  I'm not sure whether the goal of the adventure should be to strike the gong, or not though.  I'll leave the decision up to you.   ;-) 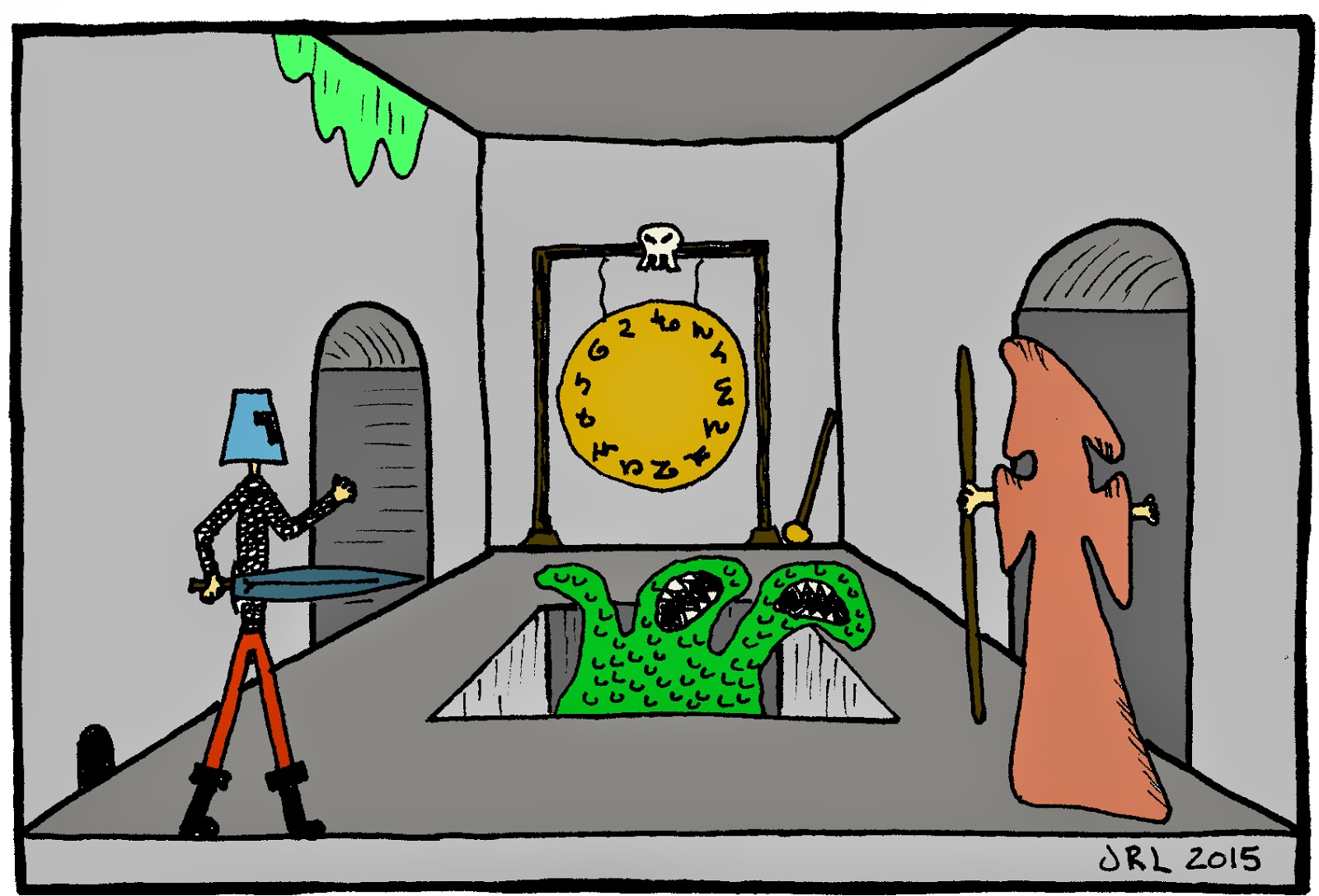 On a misty day you have a chance meeting with a morose beggar near a rushing river.  The beggar recounts to you an ancient legend that 2 weeks journey to the south, within the Harrowing Chasm of the Doomed Mage, stands the Maze of the Sorcerous Cosmos.  It is believed that there is hidden the Bewitched Gong of Contamination.  But beware, for the beggar cautions you that it is alleged the Sighing Scaly Horror of Skulls feasts upon all who go there!

If you enjoy Weird Adventure Wednesday, be sure to check out:

This week's Miniatures Monday has an evil warrior bent on slaughter, charging from the concealment of the forest! 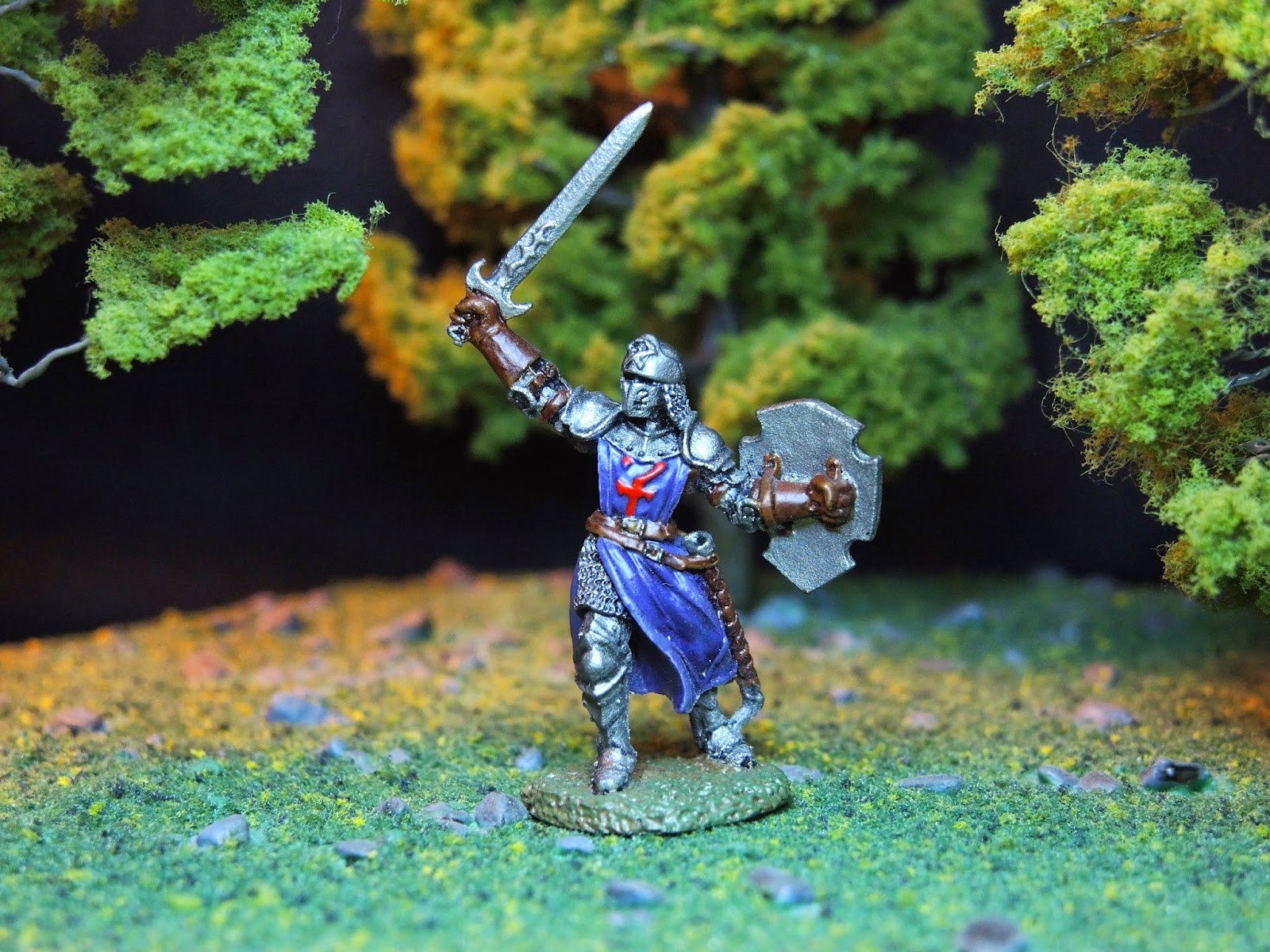 The week before last, my Kickstarter reward for the Fantasy Hero Complete Kickstarter arrived in the mail.  Ive got to say that I was pretty happy to see it as I have some very fond memories of Fantasy Hero.  My first introduction to Fantasy Hero, and to Hero Games was...yikes! 27 years ago in college when it looked like this:
I still remember my first character.  He was a thief armed only with a stiletto, which only did 1/2 d6 damage, although that damage was armor piercing.  He set of a trap involving a statue holding 2 dice that ignited a bunch of oil in a crypt we were exploring.  Fortunately, he managed to avoid taking any damage...the rest of the party was not so lucky.  I seem to recall that the troll warrior took the brunt of the damage.  :-(

The new edition (available for $10 in PDF form from rpgnow.com) follows the trend of the previous Champions Complete, by including everything that you need in one book, removing the need for the mammoth two volume set of Hero System 6th Edition.  Everything old is new again I guess, as back in the day, Hero games published complete rule sets for each of the genre's that they supported.  We had Champions for superheroes, Justice Inc. for 20s and 30s pulp, Danger International for modern spy games,  Star Hero for science fiction, and of course Fantasy Hero for Fantasy.  Hero Games eventually merged everything into the Hero System, and put out this lovely tome:

Sadly, the original printing had a tendency to fall apart, so most everyone needed to hole drill their pages and put them in a binder, but the game was great, and did a nice job of merging the enhancement that had appeared in each of the stand-alone games.  A number of sourcebooks were published for the Hero System, and eventually (and much to my surprise), we got my favorite version of the game, Hero System 5th Edition.  Essentially, 5th edition merged and cleaned up a lot of the material from the previous edition sourcebooks and gave them a home between two wonderful black covers.

5th Edition got a revised and expanded hardcover which added a lot more material, but eventually, Steven Long, who was now the caretaker of the Hero System  decided that it was time for a 6th Edition.  6th Edition made some changes that not everyone was fond of, principally the removal of figured characteristics.  While I wasn't fond of losing figured characteristics, I think that I missed the black book cover more.  Electric blue just isn't really my speed.  Also, renaming Disadvantages to Complications seemed rather unnecessary In any case 6th Edition published a gorgeous Fantasy Hero supplement, but the books that you needed to carry back and forth to a gaming session were now rather backbreaking.

So now we have Fantasy Hero Complete which slims things down to 262 pages.  It provides a good treatment of character creation and combat, but doesn't provide much in the way of spell examples.  I suspect that we will see a spell supplement much like we saw the Champions Powers supplement to Champions Complete.  Of course you could use Champions Powers with Fantasy Hero as well. The artwork is sparse, but decent.  Overall I think that the book falls somewhere in between an introductory book for Fantasy Hero, and a book for Fantasy Hero Veterans who don't want to lug around a ton of books.  If you are a complete Hero System newbie, you may be better off picking up a copy of the Hero System Basic Rulebook, which I think is a great starting point.  If you're a Hero System veteran, or if you're looking for more examples, you may be better served by sticking with the full-bore 6th edition and the original 6th Edition Fantasy Hero supplement in  PDF (available at rpgnow.com) .  This isn't to say that it's not a good book, just that I think it falls into a bit of a middle ground in terms of who it's good for.

I'm happy with the book and very happy to have supported the Kickstarter, but will I play it?  Alas, probably not as a regular campaign.  These days gaming time is precious and it's hard to justify the time spent creating characters when we only have maybe three hours a week to game.  Rules light rules the day nowadays with less reading and more playing.  I can see running a one-shot game with pre-generated characters though.  It's good to see Hero still around after all of these years.  Happy adventuring!
Posted by jrl755 at 8:54 AM No comments: