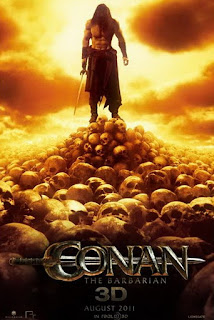 So, last night I ordered a pizza and settled in to watch the new Conan the Barbarian movie.  I had avoided it in theaters partly because it was in 3D and partly because I was concerned that it would be bad.  But it was a slow night, and I figured that as a $4.99 rental, it was worth a shot.  So here are my thoughts.
First of all Jason Momoa as Conan.  I think he was perfectly acceptable as a Conan early in his career around the time of the Robert E. Howard story "The Tower of the Elephant", an adventure that is referred to in the movie, but sadly not seen.  His voice seemed to have been digitally deepened, sort of like they did with Christian Bale in the previous Batman film, and he made the occasional terse barbaric pronouncement like the corny, "I live, I love, I Slay, and I am content", but he didn't seem to have much conviction in his dialogue.  Not that I was expecting super dialogue in a sword an sorcery film, but his Conan never seemed to get very wound-up about anything.  Also, he needed to call on his god Crom a bit more.  Not like Arnie did back in the original film where every third line seemed to be,"Crom!", but a few more Croms would have been nice.  Also I have to mention his costume.  Not that it was bad, just odd.  He wore a blanket wrapped around his wait for most of the film.  Not a loincloth, a blanket.  It was distracting enough that I started referring to him as Linus the Barbarian.  Maybe he needed frequent naps after all his slaying activities.  Who can say?
The supporting cast was OK, not great, but OK.  The female love interest/girl needed by the evil villain was good and not stuck with the thankless role of being a full time damsel in distress.  She could fight and had a nice little bit of sarcasm about her.  I particularly like when Conan told her his name and she replied, "Conan?  That's it?"  The villains were passable, but somewhat lacking.  The evil sorceress was suitably creepy, but I'm not sure that her daddy issues really added much to the film.  The male villain seemed more like a thug than an actual villain bent on resurrecting the dead and conquering the world.  James Earl Jones as Thulsa Doom, this guy was not!
"But it's a Conan movie," you say.  "What about the fights?"  Well there was plenty of fighting in the film, and while it wasn't watered down and family friendly (like the fight scenes in Conan the Destroyer), the fights seemed to lack the same solid feel of the ones from the 1981 version of Conan the Barbarian.  I just didn't get the sense that anyone was being hit with a sword, axe, hammer, rock, or whatever, in spite of the fountains of blood spewing across the screen.  As for the blood, there was just too much of it.  Now, I'm sure that people are thinking that I've gone old and soft and can't handle blood or something crazy like that.  I assure you, that's not the case.  What I mean is that everyone who got cut down in a fight in this film seemed to have been on a very high dose of blood thinners.  Huge amounts of blood splattered everywhere from any sort of wound however minor.  Maybe people in the pre-dawn of history had more blood in there bodies?  Who knows?  The special effects were OK, but strangely intrusive in my opinion.  A lot of times, they looked too much like special effects that I would have seen in a Sci-Fi,  oops, sorry, Syfy channel movie.  There was a very cool skull cave, that was called interesting enough, "The Cave of the Skull".  I wish that they had fought in front of it instead of inside of it, as it's exterior was way cooler than its rather low rent Mines of Moria interior.
The story was the fairly standard 'my village and people were slain by the evil sorcerer, and I must avenge' them tale.  That's not a bad thing, and in truth it's what I would expect from a sword and sorcery film.  Do I think they could have done better, with all of the available Conan source material that was available to pull from?  Well, yes, but they were making a movie to make money, not to please Robert E. Howard fans.  All in all I enjoyed it well enough.  There were some cool enough moments in it, but I'm glad that I saw it an 2D and didn't spend the extra cash to see it in the theater.  In my opinion, it's definitely a rental rather than a purchase.  In truth I would recommend the Michael Stackpole novel based on the screenplay over the actual film.
Posted by jrl755 at 10:00 AM No comments: 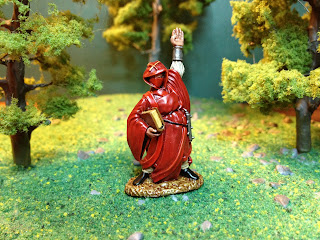 Today we have a dreaded foe known to many who have visited the Blue Frog Tavern, a Red Robed Priest!

For those of you unfamiliar with the Red Robed Priests, but interested in paying the Blue Frog Tavern a visit, it can be found here.
Posted by jrl755 at 3:01 AM 1 comment: