I got a kick out of this 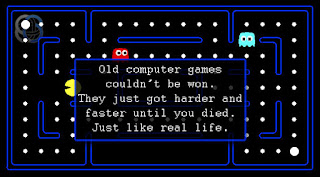 It makes me want to play some Astrosmash.
Posted by jrl755 at 9:14 AM No comments: 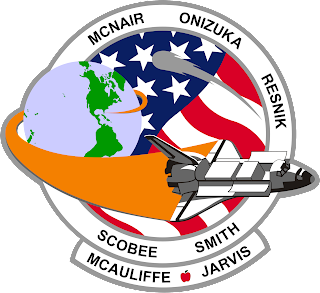 It's hard for me to believe that it's been 30 years since the Challenger was destroyed.  I remember the day very well.  I was home from school on a snow day.  I knew that there was a space shuttle launch scheduled, but shuttle launches had become pretty routine by then.  They had lost their magic.  We could go into space.  Big deal.  I didn't watch the Challenger launch that day.  I had better things to do.  Most likely I was playing a game on my Commodore 64, or reading a D&D module.  Important stuff.
That stuff seemed a lot less important when around noon, the phone rang.  It was my grandmother, and she said, "Are you watching the television?  I think the space shuttle just blew up."  I thought she was kidding.  She wasn't.  I spent the rest of the day glued to the television.  I couldn't be bothered to watch the launch, but I was unable to look away from the aftermath.
I write this now looking back at what I had come to take for granted.  Today, 30 years later, we have to rely on the Russians to get us to and from the International Space Station.  I was born in 1969, just before the launch of the second moon landing mission, Apollo 12.  I was born into a spacefaring nation.  Children born in the U.S. today can't say that, and that makes me sad.
Posted by jrl755 at 9:32 PM No comments: 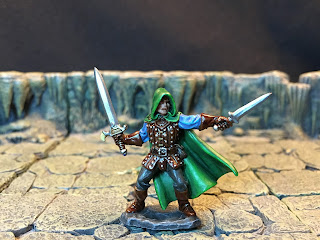 This week, Miniatures Monday has a ranger from Reaper Miniatures that I just finished.  This was a case of a miniature that sat, mostly completed for many months.  I just wasn't sure of the colors that I wanted to use for the shirt and the pants, so I just let it sit.  Finally, over the weekend, I decided to just finish it up.  In the end, it didn't come out badly, but it's becoming clear that I'm a bit out of practice with the painting.  I need to get back into the swing of regular painting.
Posted by jrl755 at 6:39 PM No comments: