As often seems to be the case with me, the thing that I started last is the first to be completed.  The car that I accidentally stepped on and had to repair  is now painted and ready to roll.  I give you 5 views of my first Gaslands car, The Skull Crusher (not a very original name, I know).  It's got that Mad Max feel that I was going for.  Overall, I'm pretty happy with how the car turned out, and I think that it ended up even better than my pre-stepping on it concept.

Well, I now have 3 cars primed and ready for painting, although I'll admit that the middle one feels like a bit of a cheat, even though I added the mini-gun and hood skull. :-) 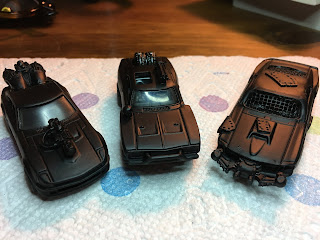 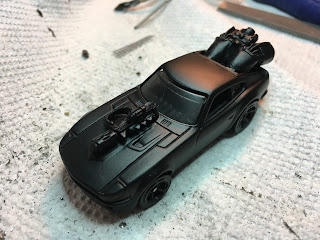 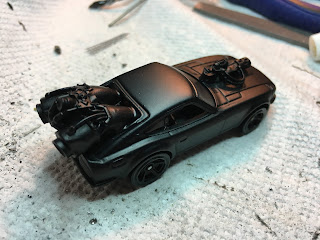 As for the more Mad Max feel, I got that on another car quite by mistake.  I had a plan for making a '69 Mustang into a car with giant speakers on it and a skull ram.  I was well on my way to realizing my vision of a death-metal racer when disaster struck (or so I thought).  I had stripped down the car and drilled out holes for all of the accessories.  Then I stepped on the car...  Quite by accident, but man was I bummed out.  The roof bent and one of the roof pillars snapped off.  I'd had this happen to my Hot Wheels cars a few times when I was a kid, and that was generally the end of them.  But this time I got to thinking.  Those dudes in the wastelands wouldn't just scrap their car when it got jacked up.  After the apocalypse, there aren't going to be factories building new cars, so they would have to fix what they had.  In that spirit, I started on a revised plan for the car, and this is what I ended up with.  First, I made new roof pillars.  Then I added patches over the big holes.  I added a few bullet holes in the passenger side door, and replaced all of the glass with wire mesh.  I even gave it the ram that I'd planned to use for the original design.  Strangely enough, I'm liking this car better than what I had originally planned!  I'm really looking forward to getting this one primed and painted, maybe even more than the first car. 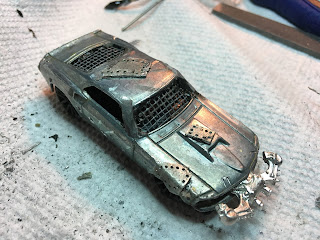 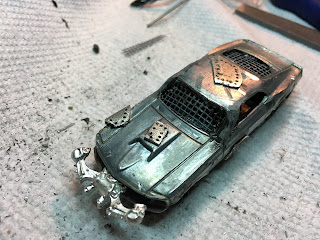 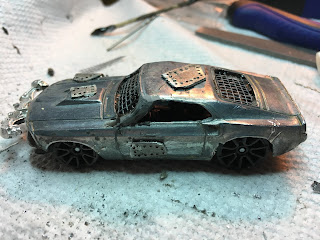 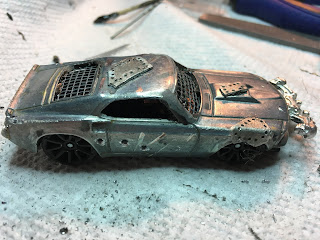