Holy crap it actually does say that. I've been watching the 1982 Conan the Barbarian film at least twice a year for the last 34 years, and until I flipped the frame, I never realized what the runes on Conan's father sword said (or in fact that they said anything at all).  SUFFER NO GUILT YEE WHO WIELD THIS IN THE NAME OF CROM.  It's nice to find that I can still be surprised. :-) 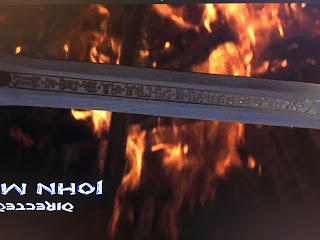 I've stared at those runes for many years an never got it.  I'm really impressed that they thought to put this kind of detail into the film.  Just one more reason that Conan the Barbarian remains my favorite S&S film of all time.  I really can't wait for the Modiphius Conan RPG.  Crom!
Posted by jrl755 at 8:59 PM No comments:

Far Away Land Stories on Patreon

Seriously though, Simian Circle Games is launching a Patreon.  They put out a great game and are fantastic about supporting it.  If you have a few extra dollars each month, you should really think about donating.  I know that I'm planning too!

Email ThisBlogThis!Share to TwitterShare to FacebookShare to Pinterest
Labels: Far Away Land, RPG

100th Anniversary of the Battle of Jutland


Today only one ship from that battle survives.  The British Light Cruiser HMS Caroline is docked in Belfast and is currently being restored for the 100th anniversary of the battle.

There is plenty of more information about the battle available in many other locations.  I just like ships.
Posted by jrl755 at 12:03 AM No comments:

Email ThisBlogThis!Share to TwitterShare to FacebookShare to Pinterest
Labels: History 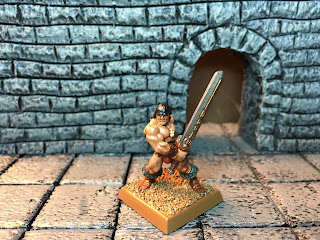 This week for Miniatures Monday, we have another figure from Fantization Miniatures.  This one is Manannan Champion with Greatsword.  You can get your own copy from Fantization here for $6.99.  I find their miniatures to be very nice, and they don't tend to require a lot of mold line cleanup, which is always a plus with me.  The results aren't bad, but in retrospect, I wish that I had gone with some war paint.  I suppose that I could always add it in the future though.  I can imagine this guy painted like Schwartzenegger when they went to steal the princess from Thulsa Doom's Mountain of Power, but I will probably do something a bit more subtle.
Posted by jrl755 at 9:59 AM No comments: