Yesterday, my Dwarven Forge Kickstarter dungeon tiles arrived.  I had pledged for three sets of the painted ones and have really been looking forward to their arrival.  As an aside, kudos are in order to Dwarven Forge for hitting their planned ship date of October 2013.


The box that they arrived in was about the size of the box for one of their smaller sets, but was packed full of goodness.  Some of the selling points for the new tiles were that they were to be lighter and more durable owing to the new Dwarvenite (aka. PVC) material from which they are cast.  These arrived packed closely together in small cardboard boxes rather than in the large styrofoam trays that the resin sets shipped in, and I didn't break my back getting them in the door.


In terms of size, the tiles match up nicely with the existing resin casts, but they are stylistically a bit different with square brick walls instead of oddly shaped stones and floors that are more similar to those found in the old cavern sets.  The new tiles also don't have adhesive felt on the bottoms like the resin tiles did, so you may want to invest in your own if you miss that.  The paint jobs on the new tiles is acceptable, but not as nice as the old ones.  This isn't a complaint, rather just an observation.  You are free to get the unpainted sets and paint them yourself if you don't care for the paint scheme.  As I understand it though you have to be careful about the paints that you use and some won't adhere well to the Dwavenite (PVC).  For more information on painting the tiles yourself, check out this link at the Dwarven Forge website.

I don't plan on doing a durability test, but the new tiles are definitely lighter.  For the two pictured above, the resin cast weighs in at 2.6 ounces while the Dwarvenite cast weighs 1.9 ounces.  Overall I'm pretty pleased with the new tiles.  I don't feel like I have to treat them as gingerly as the old ones, and they were certainly cheaper.  I'll have to give them a test in actual play before I render my final opinion, but I have a feeling that they will work out quite nicely. 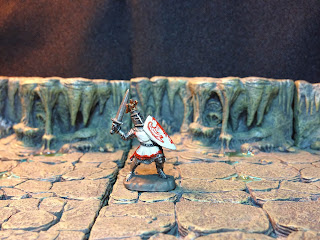 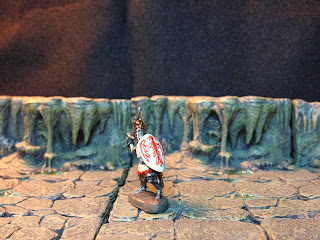 This miniature is from the old part of my collection.  It's from a long extinct company called Wizards and Lizards, and I bought it somewhere between 1983 and 1984, so it's made from lead, and it's also true 25mm scale.  It sort of makes me feel like playing Pendragon.
Posted by jrl755 at 5:32 PM No comments: 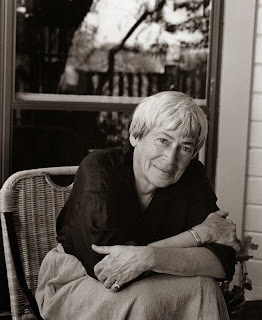 To one of my favorite authors, and one of the few who writes back, Happy 84th birthday!
Posted by jrl755 at 12:01 AM No comments: