A Game of Streets

HBO, seems to have turned its lust for blood on the beloved children's show Sesame Street.  The cable network that brings us the Favorite Character Death Hour otherwise known as Game of Thrones has decided to rid themselves of three of the longest serving members of the Sesame Street cast.  Bob, Gordon and Luis have been fired from the show.  I'm appalled by this.  Supposedly, they felt that they needed to make cast changes to better connect with more tech savvy kids in the 21st century or some crap like that.  Thank a hell of a lot HBO.  I guess Big Bird had better watch his back... :-(

Email ThisBlogThis!Share to TwitterShare to FacebookShare to Pinterest
Labels: Things that piss me off 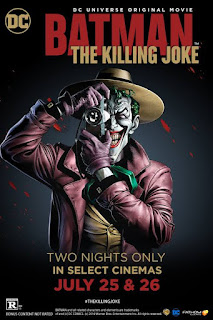 So, if you are a fan of Batman, you're probably aware that DC released an animated film version of the classic Alan Moore and Brian Bolland 1988 graphic novel The Killing Joke.  I watched the film last night and wanted to provide some spoiler-free thoughts on it.  There are a lot of ways that this could have gone wrong.  The original story was short, so it was necessary to add filler to pad out the run time.  Thankfully, the filler was added entirely at the beginning, leaving Moore's original story intact, although the content from the graphic novel doesn't start until 31 minutes into the film.  The first 31 minutes is spent establishing character relationships and following its own semi-self-contained story, which is going to be pretty controversial in its own right.  After that though things go back to Alan Moore's original story for the rest of the ride.  Kevin Conroy, Mark Hamill, and Tara Strong reprise their popular roles as Batman, the Joker, and Batgirl.  Conroy and Hamill having been playing these parts since the days of Batman the Animated Series, and Hamill is spot on as the Joker.  Conroy sounded a bit different to me though.  I can't quite put my finger on it, but perhaps Conroy had a cold while they were recording.  He still sounded decent but a bit off.  The animators did a good job of staying faithful to Brian Bolland's original artwork although it's not nearly as detailed, and they chose to go with the darker color pallet that DC has used in newer printings of the graphic novel.  I'm a fan of Bolland's original more vivid colors, but that's a matter of taste, and the darker pallet matches better with the Animated Series and with DC's other recent films.  Overall I enjoyed the film.  I didn't need the first 31 minutes, but I didn't hate them either.  If you're a Batman fan, I recommend watching it, but do yourself a favor and read the graphic novel first.  It's a quick read and well worth the time.  Also, be aware that this film is rated R, so you may want to think twice before watching it with younger kids.  The film was released in digital format on July 26th and will be available on DVD and Blu-Ray on August 2nd. 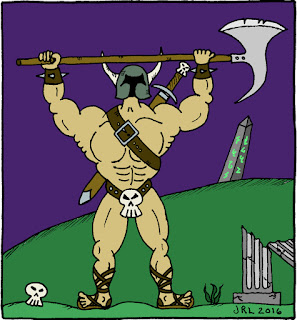 On a rainy afternoon you cross paths with a churlish barbarian mercenary in a smoky gambling den.  The mercenary grudgingly spins you a yarn that 3 weeks walk to the northeast, across The Unfathomable Wastelands of Woe stands The Pulsating Monolith of Mind Warping.  Scholars believe that hidden in the chambers beneath the monolith can be found The Obsidian Insanity Harp of the Horrid Minstrel.  But beware, for the mercenary warns you that The Gruesome Tentacles of Brain Liquefaction are said to dwell in that dreadful place!
Posted by jrl755 at 6:33 AM No comments: 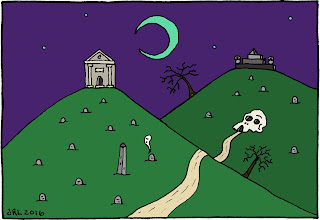 This week for Random Table Tuesday, we have a d100 table of crypts, tombs, and mausoleums.  So the next time you need to send your players of to find something in a mysterious crypt, but can't think of an intriguing name for it, try one of these.  The Skull Crypt of the Incinerating Monkey anyone?

I post a lot of pictures on this blog of miniatures that I'm pretty happy with.  These are not those miniatures.  I've been painting RPG miniatures for a long time, ever since I brought my first set of Grenadier Action Art miniature home from Children's Palace on a Friday night in 1982.  Back in those days, I used Testor's oil based model paints because that's what I had, and they were murder to work with.  The tiny pots of acrylics that came with the action art sets were just too limiting from a color choice perspective.  What you see before you are the last remnants of my old painting days.  Most every miniature that I did in those early years has been stripped and repainted or just stripped and left to sit, but for some reason I've left these as they were, frozen in time from a bygone age.  They span the period from around 1983 to about 1992, when I graduated from college and stopped painting for nearly 15 years.  I've put them here for anyone who doesn't think that their miniatures are good enough, for anyone who isn't happy with their painting.  Look at these and persevere.  Your painting will improve.  You just have to practice.  Keep at it.  I wish that I hadn't stopped for those 15 years.  These are my reminders to always keep working on my craft.
Posted by jrl755 at 6:36 AM No comments: