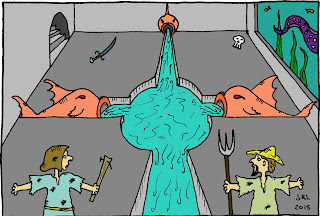 On a raw night you are accosted by a chatty cutthroat in a forest clearing.  The cutthroat tells you a rumor that 9 days hike to the northeast, deep within The Ice Swamp of Visions is hidden The Flooded Crypt of the Phantasmal Fish.  Legends hold that there is hidden The Irregular Spidersilk Hairpiece of Dread Voices.  But beware, for the cutthroat warns you that The Pustular Brain Insect of The Unholy stands guard there!

If you enjoy Weird Adventure Idea Wednesday, be sure to check out these free resources: 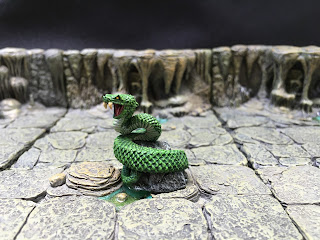 Deep In a forbidding dungeon, this scaly horror coils itself around the remnants of a shattered obelisk and prepares to strike!  This is another on of those miniatures that I started painting well over a year ago and then let fall by the wayside.  I wasn't sure whether to go with a desert color or with stripes, so in the end I just went with greenish scales.  Nothing earth shattering, but I'm pretty pleased with the end result.  The miniature is from Reaper Miniatures and was sculpted by Julie Guthrie.  It's 03676: Giant Snake, and you can get your own from reaper for $9.99. 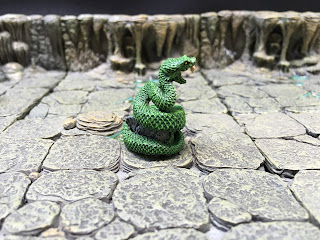 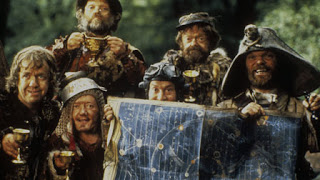 Kenny Baker, known to many as the fellow inside of R2 D2 in the star wars films has died at the age of 81.  However, I don't think of him as R2 D2 as much as I think of him as Fidgit from Time Bandits (front row: Second from left).  I remember my parents taking me to see that film in the theater in 1981, and it's still a favorite of mine.  With him gone, only two of the bandits remain, Malcolm Dixon, who played Strutter (second row: left) and Mike Edmonds, who played Og (front row: left)
Posted by jrl755 at 10:53 AM No comments: