So the first time that I ran FFG's Edge of the Empire, I found myself wishing for an easy way to represent enemies.  As you know, Edge of the Empire and the rest of FFG's Star Wars games use special dice, so it's necessary to roll different amounts of differently shaped and colored dice for different opponents depending on their stats and skills.  Now this isn't that hard, and once you get to know the system it's not too bad to figure out, but it can be tricky for GMs that are new to the system.  What I found myself doing was writing down the opponents then doing crude sketches of the dice so that I quickly knew how many combat dice to roll for Thug #1 or Slaver #2.

When I came across these Adversary Decks at my FLGS I was pretty excited.  I imagined that they would have all of the things that I needed for an encounter in one easy place.  We'll talk about whether or not that turned out to be the case a little bit later.
First, let's talk about the cards.  There are three decks currently available; Scum and Villainy which has an assortment of smugglers slavers, and bounty hunters; Citizens of the Galaxy, which has things like droids, dancers, and various administrator types; and Imperials and Rebels, which has your various Imperial and Rebel soldiers, leaders, and pilots.  The front of each card has a large full color adversary picture on the front along with all of that individual's stats and skill.  The back of each card lists the adversary's talents, abilities, equipment, and a descriptive writeup to provide some flavor.

I think that these cards were a great idea, and the art is top notch, but sadly, they have what I think is one big drawback for the novice GM, and that is that it is still necessary to figure out the dice on your own.  So, a Hired Thug with an Agility of 2 and a Ranged (Light) skill of 1 would roll... "Hmm, I'll need to figure that out" to attack.  I think that it would have been great to have represented at least the adversary's combat skills in format that was used in the Edge of the Empire Beginner's Box adventures, which used the dice symbols along with the skill ratings.

Many of the cards have plenty of space on them for it, and I think it would have been possible to have shortened the ones that didn't.  It's really a shame that they didn't do this because I think it would have made these cards a must have for all GMs who are new to the system.  When I compare the Star Wars Adversary Cards to my recently arrived Far Away Land RPG Creature Cards: Series 1, I have to say that the Far Away Land cards are more useful to me as they provide everything that I need with no needs for extra calculations.  But then I'm kind of lazy. :-)

Overall, I'm going to give The Star Wars Adversary Decks a 3 out of 5 rating.  They are a good idea that could have been great if they had just included the dice symbols.

Email ThisBlogThis!Share to TwitterShare to FacebookShare to Pinterest
Labels: Edge of the Empire, RPG, Star Wars


Well, here we are on another Wednesday, and just like a bad penny, another weird adventure idea has turned up! 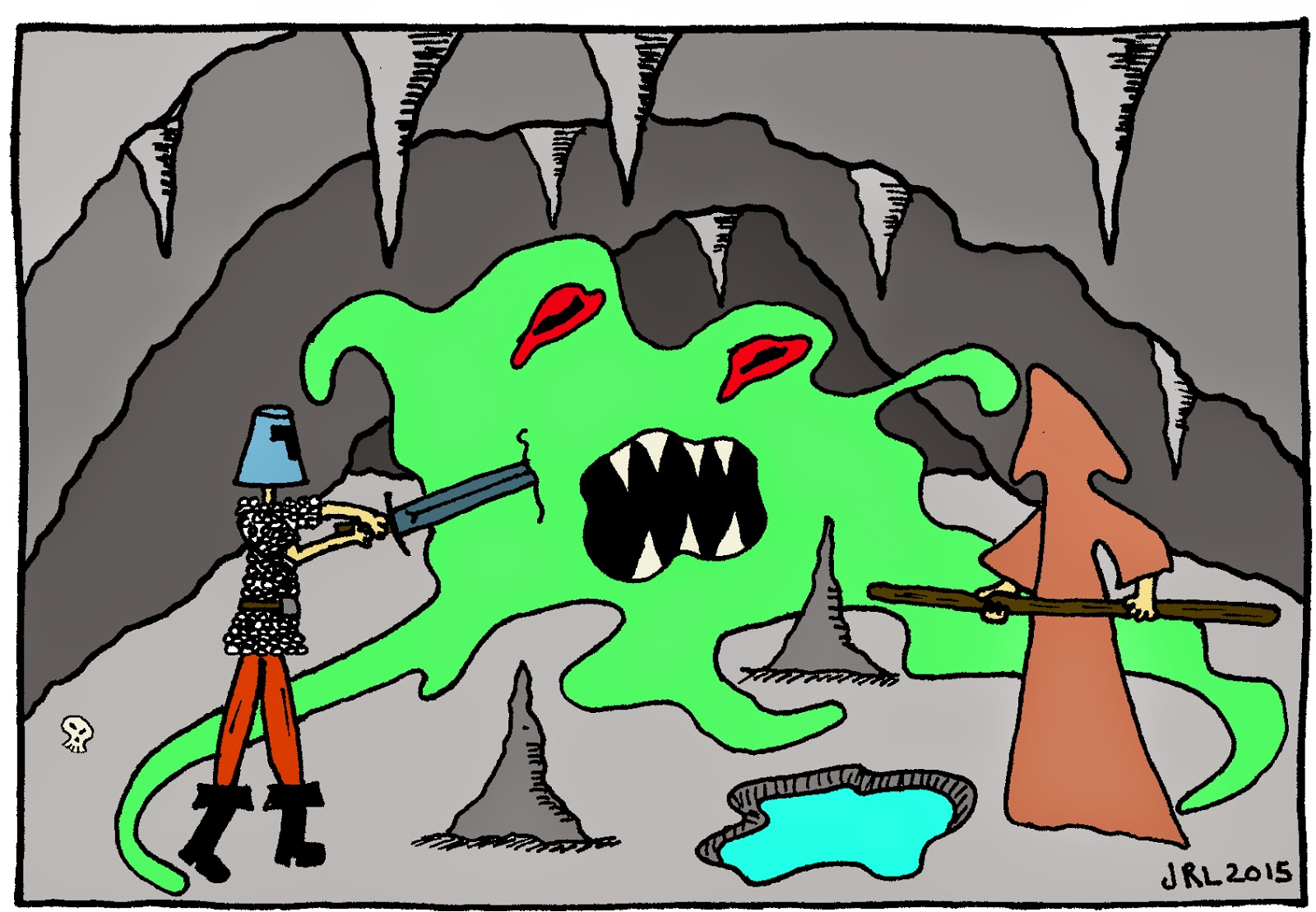 On a starry night you have a chance encounter with a pious friar on an overgrown footpath.  The friar explains to you that 23 days walk to the northwest, beneath the Crater of Blasphemous Bones, lay the Melting Caverns of Transcendence.  It is reputed that there is hidden the Eternal Saw of Silence.  But beware, for the friar warns you that it is said the Amorphous Mutant of Decay engulfs all who dare enter that forbidden place!

If you enjoy Weird Adventure Idea Wednesday, be sure to check out these free resources: 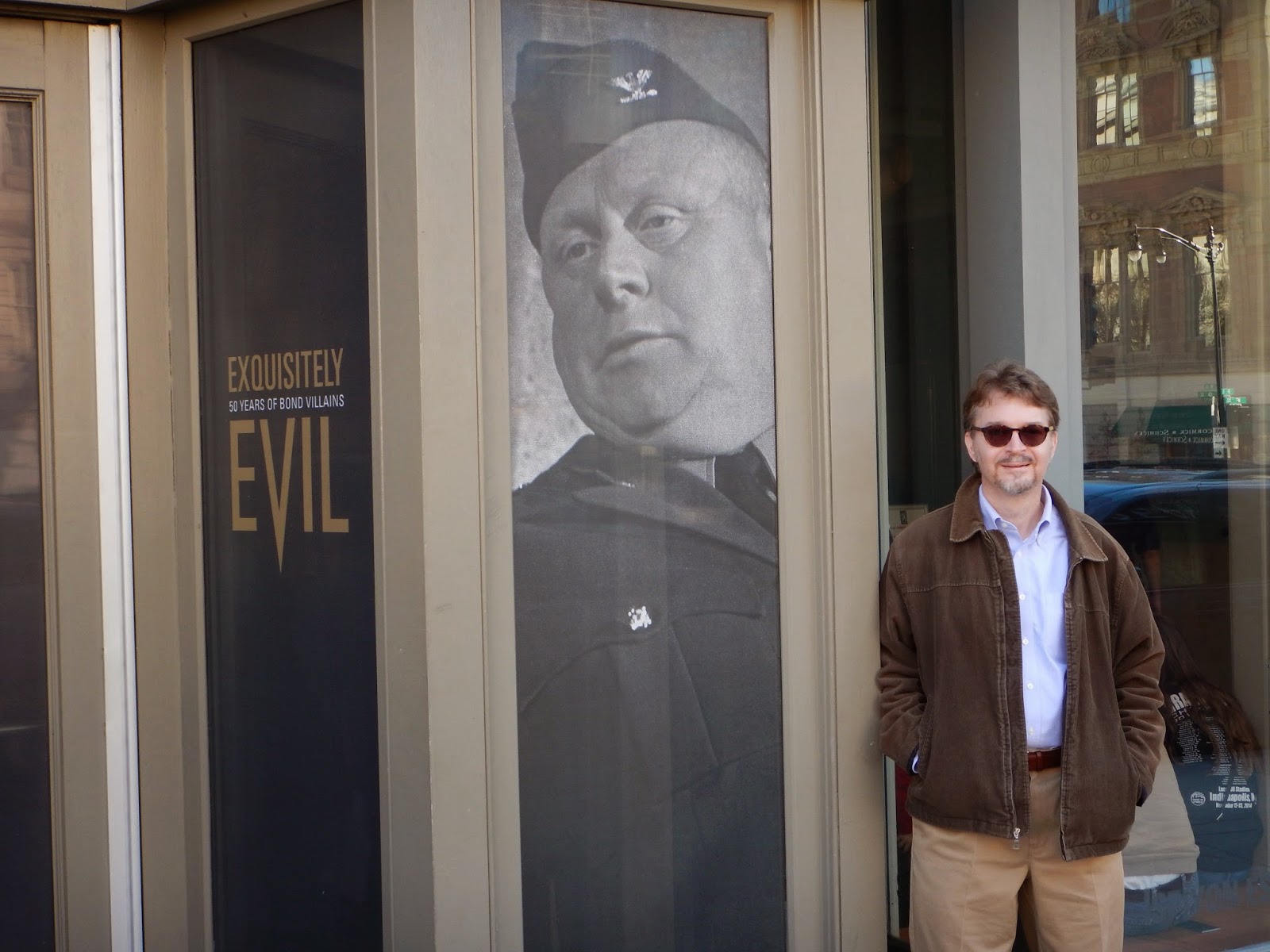 This really makes me want to play a game of Danger International, or Top Secret. :-)
Back in the day, the day being the early 1980s, we would take the occasional break from dungeon delving to explore a more modern genre, the espionage game.  Now back then, in the area where we lived the two options were TSR's Top Secret and Victory Games' James Bond 007 RPG.  I can't recall exactly why we played Top Secret, but it was probably the fact that it came out first.
Now I secretly suspect that my group favored Top Secret even over D&D.  I was a lot more into fantasy than the rest of them and I think they found the world of spies and saboteurs a bit more cool.  It was after all the Cold War.   In any case, Friday evenings would often find us knee deep in some spy shenanigans.  The players were employees of the M.S.O. which stood for the Mysterious Spy Organization, headed by the mercurial spymaster known only as J.  The Mysterious Spy Organization was famous for it's ever moving headquarters, which was once found to be hidden in secret tunnel concealed beneath an ice machine in the middle of the desert.
The party consisted of Keith, who was the most straight up James Bond type spy, Ross, who really liked to shoot guys (more on this later), and Len, who would probably have sold out his mother to the enemy for the right price.  Now Top Secret, unlike D&D had hit locations, which were the source of endless amusement to us, particularly to Ross.  Ross's character always carried a 9mm P-08 Luger, and he shot everyone in the foot.  The left foot.  This was not intentional, but rather just the way that he rolled.  In order to determine hit location, the players just had to make a simple percentile dice roll modified by certain factors like movement and cover.  Ross had the dubious luck to frequently roll in the 98 to 00 range, which is generally a range associated with good things like head shots and critical hits.  Not so in Top Secret though, for in that system, the range was reserved for the lowly left foot.
We had a lot of fun with that game, like the time that Keith's character beat the party's recurring nemesis Nelson to death with the porcelain cover of a toilet tank.  The there was the time when Len, in order to prove his loyalty to the villains during an infiltration mission, shot Keith in the head.  And of course, there were all those villains who were found limping after being shot in the left foot by Ross.
Our adventures weren't terribly original.  Most of them happened in casinos, or remote alpine ski resorts, or exotic Caribbean islands, and were thinly veiled rehashes of our favorite spy novels, but we had a blast.  Man, those were some good times.
So who else has some fun spy adventure stories from their youth that they would like to share?
Posted by jrl755 at 8:17 PM No comments: Links to this post

Email ThisBlogThis!Share to TwitterShare to FacebookShare to Pinterest
Labels: RPG 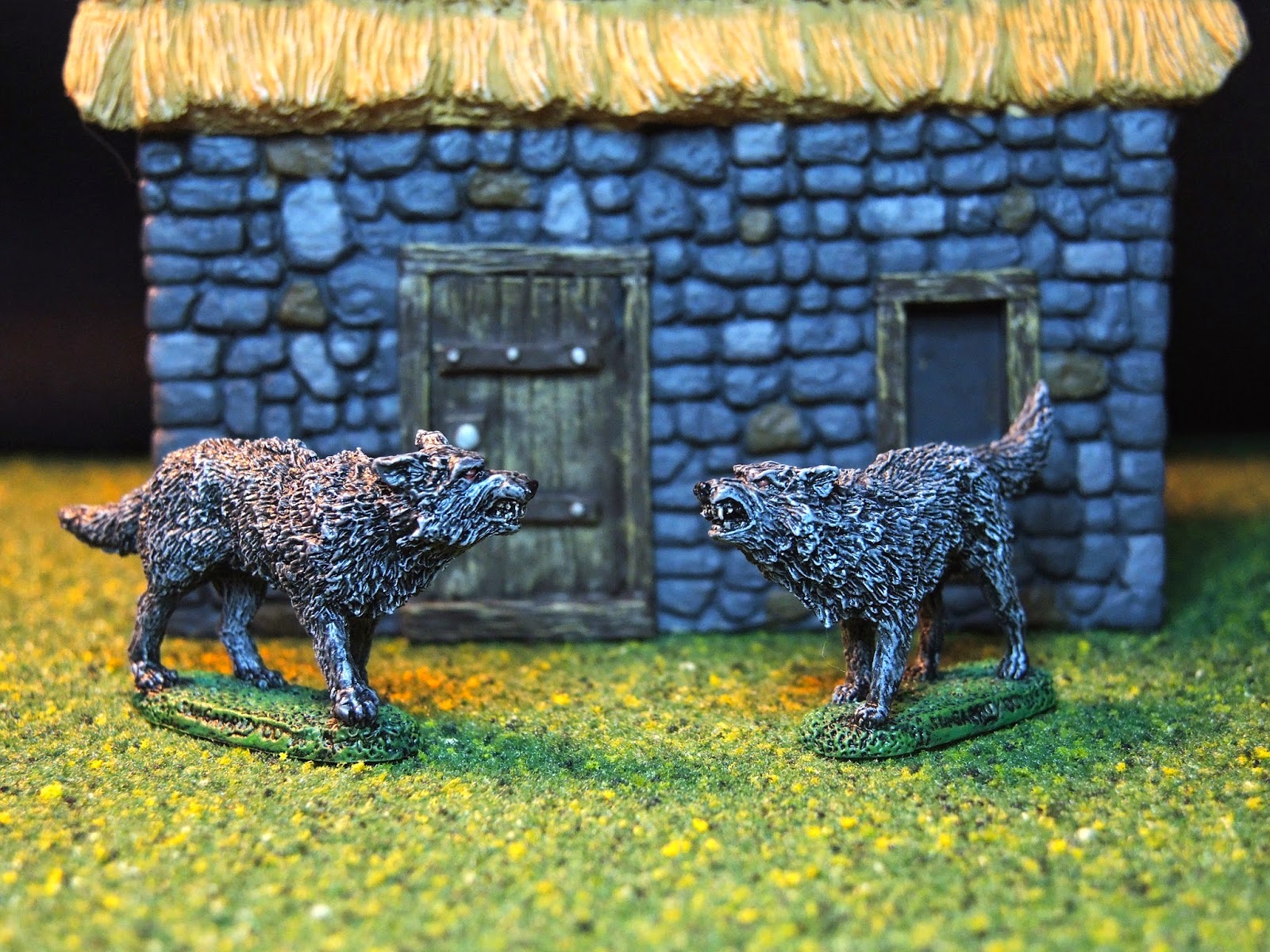 It's Miniatures Monday once again, and this weeks we see two wolves prowling outside of a humble peasant cottage.  Those poor peasants!  Last week they had a brigand, and this week they have wolves.  They'll be lucky to be here by next week.
Posted by jrl755 at 3:32 PM No comments: Links to this post