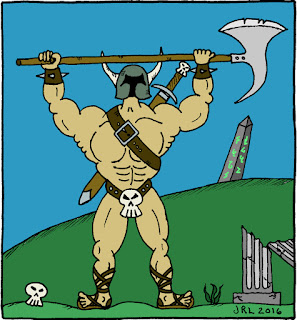 On a brisk evening you come upon a scarred gladiator near an ancient shrine.  The gladiator recounts to you a tale to you that 25 days journey to the west, beyond The Foreboding Dunes of the Gods can be found The Sanctified Cavern of Blood.  It is reputed that there is hidden The Agate Visor of Purity.  But beware, for the gladiator alerts you that it is said The Dire Mind Wrecker of Fetishes tortures all who go there!


If you enjoy Weird Adventure Idea Wednesday, be sure to stop back each week, and check out some of the other free resources in this blog.
Posted by jrl755 at 8:44 PM No comments: 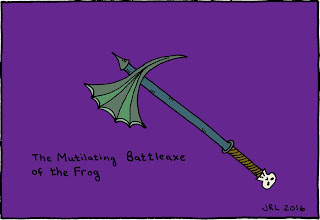 This oddly shaped battleaxe was created by the ancient frog god Umha as a reward for one of his most powerful frogman champions.  The axe is forged from a strange greenish metal which is lighter than steel and is resistant to all corrosive forces.  The axe imparts supernatural jumping abilities on the wielder, allowing them to leap a distance equal to their normal movement (30' for humans and Elves, 20' for dwarves and halflings).  In combat the axe acts as a +2 magical weapon doing 1d10+2 damage.  If the wielder scores a critical hit with the axe, the critical hit is rolled normally, but there is a chance that the axe will inflict additional mutilation to the victim.  Roll on the Additional Mutilation Table below:

As with many magic items created by the ancient gods, this one comes with a price.  Each time the axe inflicts an additional mutilation (any effect other than None), there is a chance the the frog god Umha will notice the wielder of the axe and grant him or her a "blessing".  Roll on the Blessings of Umha Table below:

* All transformations are proportional in size to the victim's original size.