Ever since I was a child, this has been one of my favorite D&D images. Now, everyone who has ever been anywhere near a D&D book KNOWS what's inside the devil's mouth, but something about this picture really strikes a chord with me. It just oozes mystery. The leering bas-relief of the daemon with its gaping maw and the mist filled archway really puts my old-school dungeon senses on high alert. I know the death that awaits, but that still doesn't allay my curiosity. Like the mage in the picture, I still want to look...

Terror from beyond the grave! 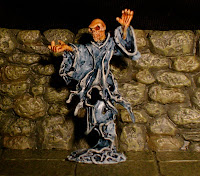 For the past three weeks I have been playing in the Wednesday night D&D Encounters game at my local gaming store. I'm not sure why I even decided to play. Quite possibly it was just that I needed my fantasy with swords fix as most of my recent gaming has been fantasy with guns. Now, I had no small amount of reservation about playing in a random pickup group. My fourth edition experience up to this point had been limited to a one-shot when 4e was released and a couple of WOTC Game Days. The one-shot was fun and I didn't hate the system, but the Game Day games were iffy at best. At Games Days, I've had a tendency tend to wind up at tables with people who know the rules far better than me and are more interested in optimizing their play rather than just having fun. Now anyone who knows me knows that I'm not much of a rules guy. I like to know enough about the rules to get by, but I'm far and a way more interested in playing and having fun and having people tell me that I'm playing my character wrong doesn't do much for my enjoyment level. In any case I decided to try it, and I'm certainly glad that I did. I sat down at a table with a GM four other players that I'd never met and had an absolute blast. I knew early on that it was going to be a good games when one of the players, who just might be nearly half my age said that we wanted to go any buy some equipment. And what did he want to buy? A ten foot pole! Yes, a ten foot pole. Now, I can't remember the last time that I saw someone buy one of those, but it just may have been in the 1980s. In any case, that little event made me think, "This is going to be good."

So we were off and running. Our group, known unofficially as the Band of the Naked Minotaur set forth in search of fame and glory. These guys knew the rules, but everyone was there to have fun, and the more I have been playing, the more that the 4e rules have come to grow on me. No, this isn't MY D&D. My D&D will always be rooted in randomly rolled stats, save or die poison and rust monsters that eat your normal armor with no saving throw, But that doesn't mean that I can't enjoy 4e as well. A lot of people have complained that 4e is more about roll-playing than role-playing and that the game has borrowed too much from MMOs. To the first point, almost any game can be a role-playing game. I've played games of Nuclear War where people played roles. If people want to role-play, they will, if they don't, they won't regardless of the rules. As for borrowing from MMOs, sure, there are plenty of things in 4e that remind me of World of Warcraft, but it's still a tabletop game and we're all still sitting around telling stupid jokes and rolling dice rather than sitting hunkered down in front of our PCs all alone.
As with all of my posts, there is no grand and powerful point here. I'm not trying to sell anyone on anything. I ramble on about whatever strikes my fancy. I've found that I can enjoy 4e, and in the end having fun is what games are all about for me.

Addendum: I've actually been reading the 4e rules. Yes, Virginia, I've been reading a rulebook, and I may just have to give 4e a try form the GM side of the table one of these days.
Posted by jrl755 at 9:03 AM No comments: