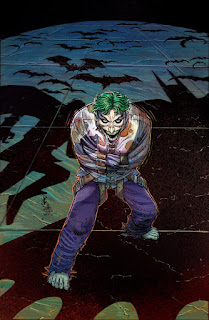 Warning: This contains spoilers, and while most everyone who is likely to read this comic has probably already done so, I still feel the need to say this.

The Dark Knight Return: The Last Crusade is a prequel to Frank Miller's classic 1986 graphic novel The Dark Knight Returns.  As we all know, in the original series Jason Todd A.K.A Robin had been dead for at least 10 years, but we were never told specifically how he died.  Interestingly, this death predated Jason's death in the normal DC Continuity by more than two years, but let's not bother with the maze that is DC's continuity for the time being.  Let's just focus on the new book.

Let me set the stage by saying that I love Frank Miller's original The Dark Knight Returns.  It was and still is the book that has defined Batman for the modern age.  It's effects are still being felt in the Batman films, where each one seems to feel the need to reproduce at least one scene from The Dark Knight Returns.  I also really enjoyed his later work Batman: Year One because I felt that it gave a wonderfully realistic take on Batman's early days.  I was much less impressed by The Dark Knight Strikes Again though.  I honestly thought those books were a mess, and I'm still not sure what was actually going on in them.  I'm going to lose a lot of people by saying that I also enjoyed All Star Batman and Robin the Boy Wonder.  I know, that's practically sacrilege, and I'll bet it causes a number of people to stop reading right now.  For those of you that are still here, I was very excited about the Dark Knight II: The Master Race and having been enjoying reading it.  But it was The Last Crusade that I was really excited for.  Finally, we were going to read the story of what caused batman to retire and learn the fate of poor Jason Todd, who by the way, I liked.  I still regret not calling in for the Jason lives or dies vote.  For those who are interested see my post on Jason's finest hour.  So how was The Last Crusade?  Well, here's where the spoilers begin.

Honestly I felt that it was fairly disappointing.  It's rather short, coming in at only 64 pages, and while it does give us a taste of the last days of an aging Batman, I feel that it came up short.  We are treated to a Batman who physically declining and is thinking of retiring to spend his time with Selina Kyle but just can't quite do it.  We also get to see Jason Todd's Robin as a brash, rather bloodthirsty sidekick when he traps some villains in a burning van and they get cooked.  He appears to enjoy their deaths, but not enough to sell him as the psychopath that many people have branded the character.  It's Jason's death where the book really fell down for me.  I know that comic characters dying has become so much the norm that barely anyone notices anymore, but Miller's world is supposed to be more realistic than the normal DC continuity, and death is much more permanent here.  Jason/Robin's death should have carried more weight.  It was implied in the Dark Knight Returns that Jason's death was a significant factor in Batman deciding to retire.  Batman even kept Jason's costume on display as a memorial.  In this book though, Jason's death almost feels like an afterthought.  It occurs on the last page of the book and I'm not even sure if he is dead by then or just badly beaten and captured by the Joker.  I've seen no indication that there will be a part two, so I'm laboring under the assumption that that's it.  The Joker's thugs beat Jason (maybe to death, maybe not), and the book is over.  The end.  Nothing on Batman's reaction to the death, no funeral, nothing.

Don't get me wrong, it's not a bad book.  The artwork is good, and the story is comprehensible.  I'm looking at you The Dark Knight Strikes Again.  It just feels like a bit of a letdown.  Perhaps there will be a follow-up book, that will deal with the aftereffects of Jason's death, or perhaps not.  DC's website lists it at Dark Knight Returns: The Last Crusade #1, so maybe there will be a #2.  I certainly hope so.  In any case, at least we got to see the classic Robin costume one more time.

Massive Darkness Board Game Kickstarter In Its Final Hours! 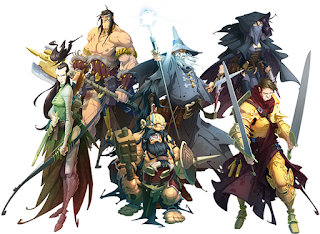 There are less than 14 hours to go in the Massive Darkness Board Gamer Kickstarter from CoolMiniOrNot.  The campaign is fully funded and has passed the 3 million dollar mark with a ton of stretch goals unlocked, many of which are KickStarter exclusives.  The game looks like an awesome dungeon Crawler, and there are even optional buys available that turn this into a truly massive game.  The sheer number of quality miniatures might be worth the $120 pledge price alone!  So, if you are on the fence about this, it might be time to stop over at the campaign site and have another look, as time is running out!  Also, feel free to share this with any of your friends who might be interested.

On a gloomy evening you come across a chatty prestidigitator in a rundown part of town.  The prestidigitator discloses to you that 2 weeks hike to the northwest, atop The Windy Precipices of Blood, can be found The Ruined Prison of Flesh Eating  It is rumored that within that place is hidden The Eerie Cutlass of Frozen Hellfire.  But beware, for the prestidigitator warns you that The Skull Sisters of the Crimson Helm annihilate all who dare enter that terrible place!
Posted by jrl755 at 9:25 AM No comments: 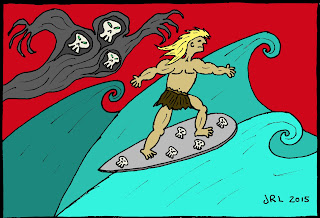 Today, hot on the heels of my 600th blog post, I've reached the100,000 page views milestone.  That's a lot of views of the crap that I put here, and I would like to thank everyone who helped it happen.  I hope that those who read this blog enjoy the stuff that they find here even a fraction as much as I enjoy creating it.  So, to honor 100,000 page views, enjoy this image of a Barbarian riding on sweet skull covered surfboard.
Posted by jrl755 at 7:07 PM No comments: 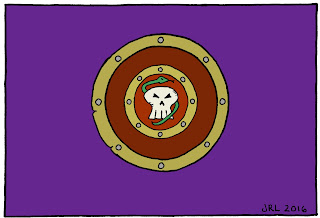 It's Tuesday again, and that can only mean that it's time for another random table.  This week's table is magical shields.  Oddly enough, this time some of these even sounds beneficial. :-)  As with all of my random item tables, they are system agnostic, and the actual stats are up to you to decide to fit your particular game system, but I like to think that most of these are descriptive enough that you shouldn't have much trouble.  If anybody uses any of these, I'd love to see the items as designed for whatever game system you use, so feel free to post them here.  Enjoy! 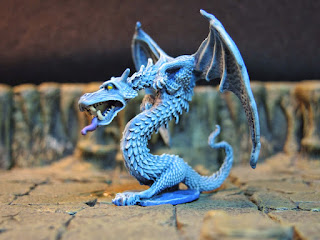 No new miniatures were completed this week, so we must content ourselves with revisiting several older pictures of an ice drake that I'm reasonably pleased with.  This was one of my more effective uses of the dry-brushing technique.  This is an old Ral Partha miniature, but it is still available from Iron Wind Metals for $13.95. 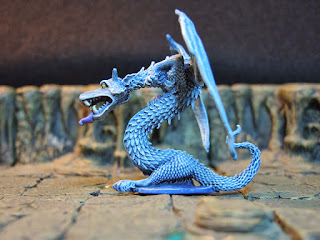 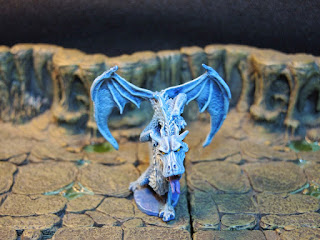 
Nothing gaming related here.  My grandmother, who died in 2012, would have been 92 years old today.  This is a picture of her sitting in the snow in Zermatt Switzerland in 1945.  The picture didn't scan very well, but then it is pretty old.  It's funny to me because she hated snow.  I remember her telling me about the Christmas that she and her brothers all got sleds, and she told her parents that she didn't want it because she hated the snow.  I still have the camera that this photo was taken with, but sadly it's impossible to find film for it these days.
Posted by jrl755 at 2:44 PM No comments: