Phat Lewt in the Magic Realm


Last night I was playing Magic Realm via Realmspeak, and wandering around the lands with what I call my Power Trio.  No, we're not talking about Rush, but that would be awesome.  My Power Trio consists of the Berserker, The White Knight, and the Dwarf.  These three can take on any of the big monsters in the game without much risk, although the four dragons who showed up once made things a little interesting.  All three are good fighters against big heavily armored monsters, and the dwarf, though he is slow, is excellent at finding treasures in the caves. 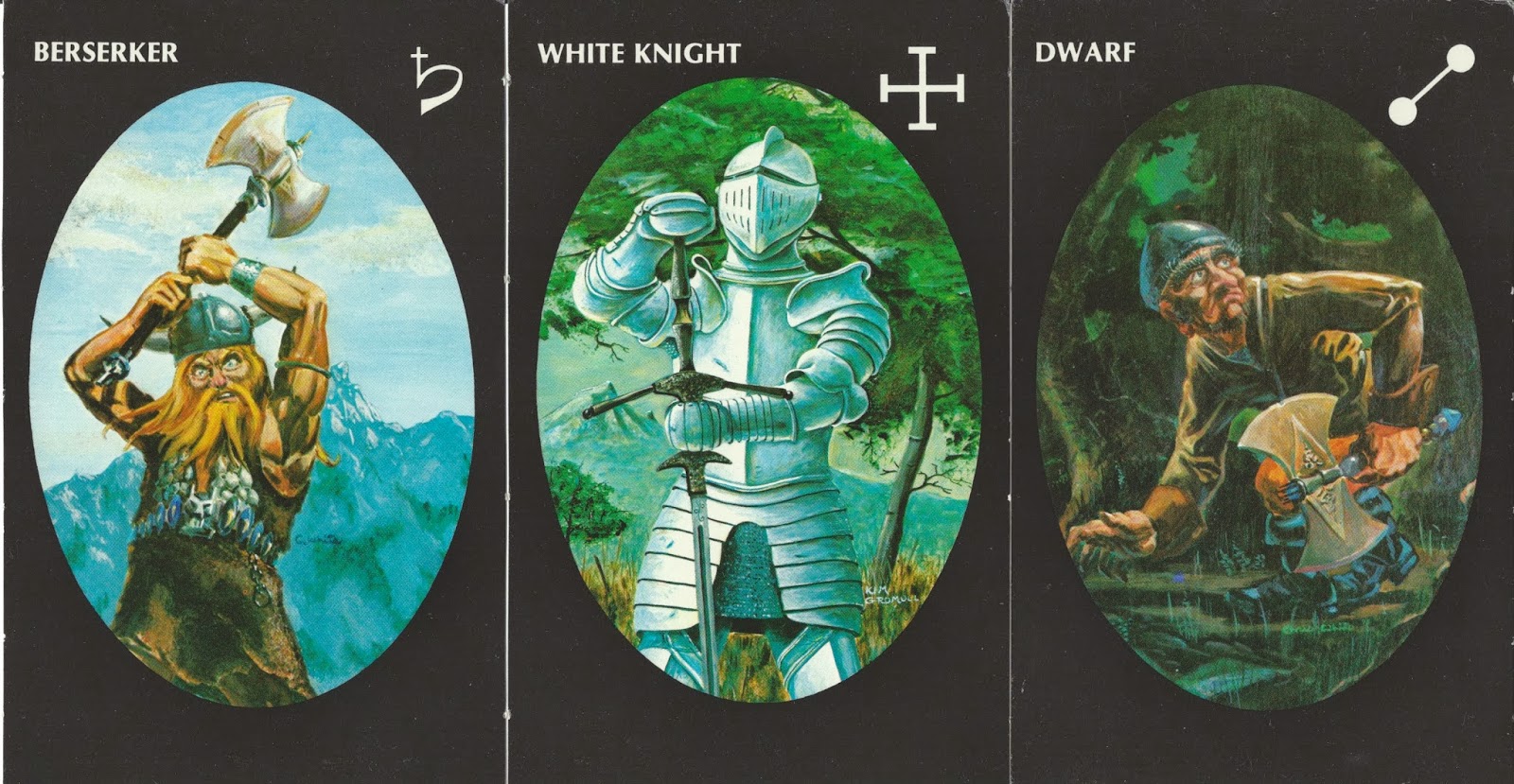 We were killing monsters collecting lots of treasure, but at first most of it was best suited for the magic using characters in the game.  Then we found the Crypt of the Knight and managed to loot it without being cursed.  I got the Bane Sword and the Tremendous Warhorse for the White Knight, making him even more awesome.  We then moved on to loot the Hoard which scored the Gold Helmet and the Silver Breastplate for the Berserker.  The Dwarf got a rock, but then hey, he is the dwarf. :-)

With the White Knight's heavy armor, the Berserker's high toughness and the Dwarf's combat ability and cave knowledge, these three can rack up some serious treasure when the work together.
Posted by jrl755 at 1:45 PM No comments:

The Fascination of the Magic Realm 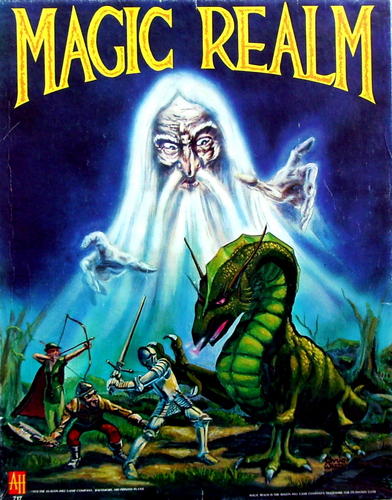 Ahh, Avalon Hill's Magic Realm.  There are times that I wonder why I have such a great fascination with a game that I can barely play.  Now when I say barely play, that may not be entirely accurate.  If given enough time, I can set the board up.  I get movement and have a pretty decent grasp on combat.  Magic is kind of a mystery to me, but that's probably more because I don't generally play magic using characters, and horses still confuse me.  But even with these issues, the game still has kept a hold on my mind after 35 years.

As I've said in previous posts, I get my original copy for Christmas in 1979 as a gift from my aunt Cathy.  She knew that I was into stories about wizards like The Hobbit and she either saw this in the toy store or bought it through her book club.  Yes, they sold Avalon Hill games in toy stores and through book clubs back in those days.

I can still remember opening that box on Christmas Eve at my Grandparent's house and marveling at what was inside.  Those hexagonal map tiles were just awesome.  The had forests and cave and mountains.  It looked incredible. 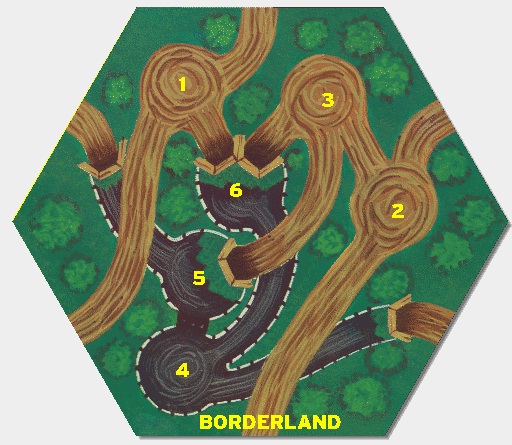 Then there was the rulebook.  The blue first edition rule book.  Now I was 10, reasonably bright, and reading well above my grade level, but that book was a mystery to me.  Still, as obtuse as the rulebook was with with wargame-like structure and confusingly organized instructions, there were gems to be found.  There was a pool that a giant octopus lived in.  There was a vault filled with treasure and a crypt of a knight.  There were natives who you could hire to help you or kill for their treasure.  In short, there was magic in this game. 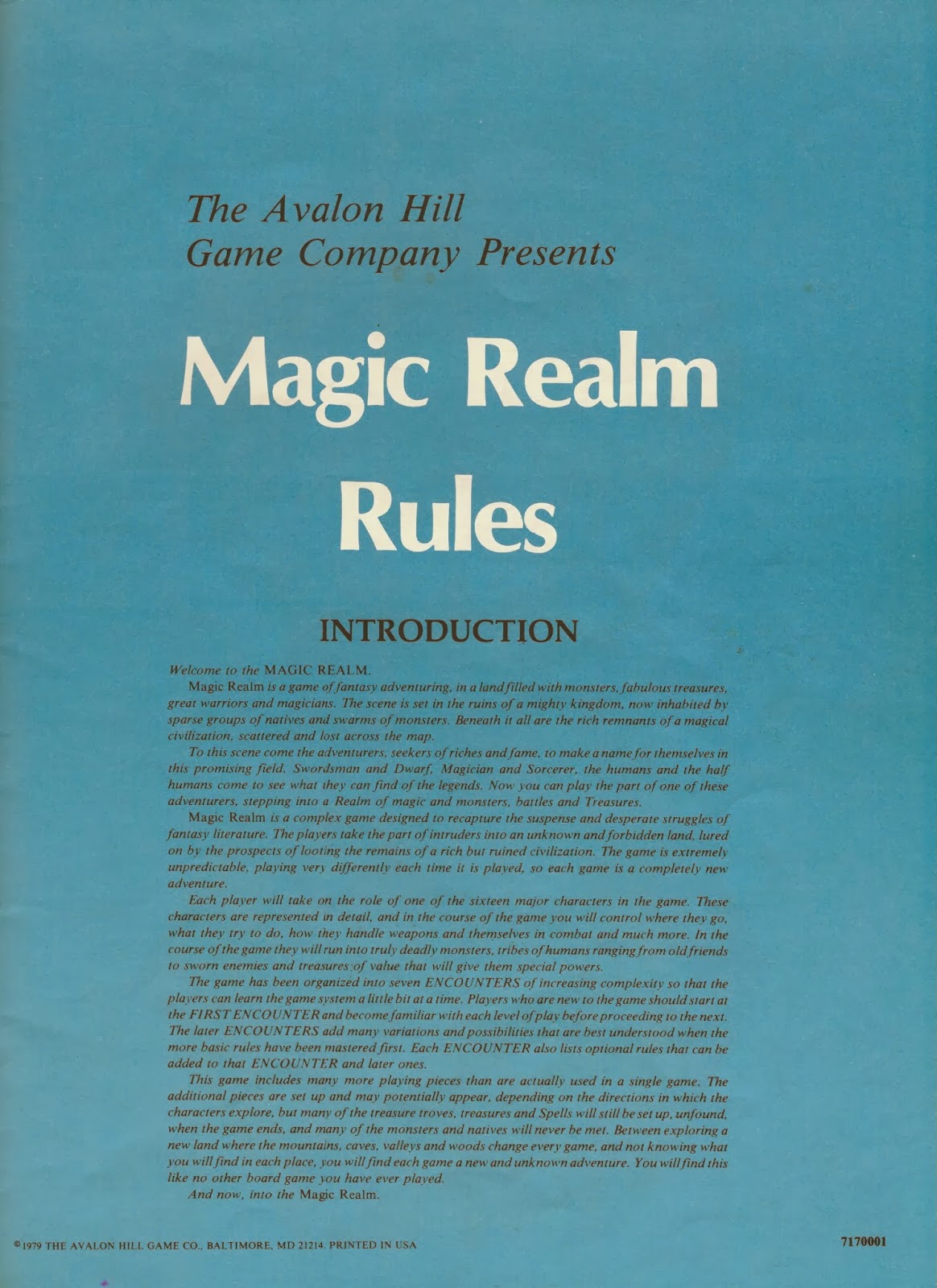 For years I would pull the game out of my closet and make my best attempt at setting it up, but mostly I would just stare lovingly at the pieces knowing that there had to be an awesome game in there somewhere.  And of course I was right.  It wasn't until I was in college that I actually got to play a real game of Magic Realm, and it was everything that I could have hoped for and more.  The depth of the game is incredible and the variety is seemingly endless.  The second edition rulebook helped a lot too. 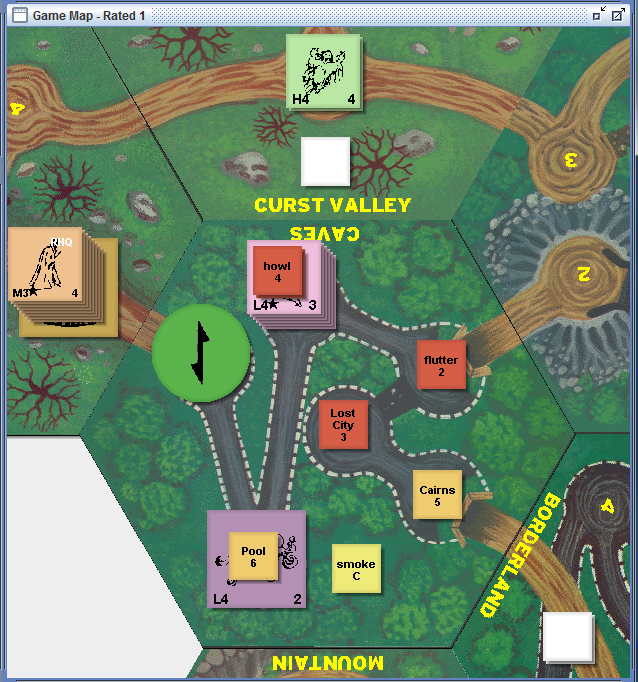 These days, I can play it via Realmspeak, which certainly saves on the setup and record keeping time.  It's not as fun as playing with live people, but it has the advantage of being available all the time.  I've looked for other games to love over the years, but none of them have ever come close.  Most recently I picked up the Mage Knight boardgame, as it sounded like it might be a spiritual successor to Magic Realm, and while it was cool, it just isn't Magic Realm. 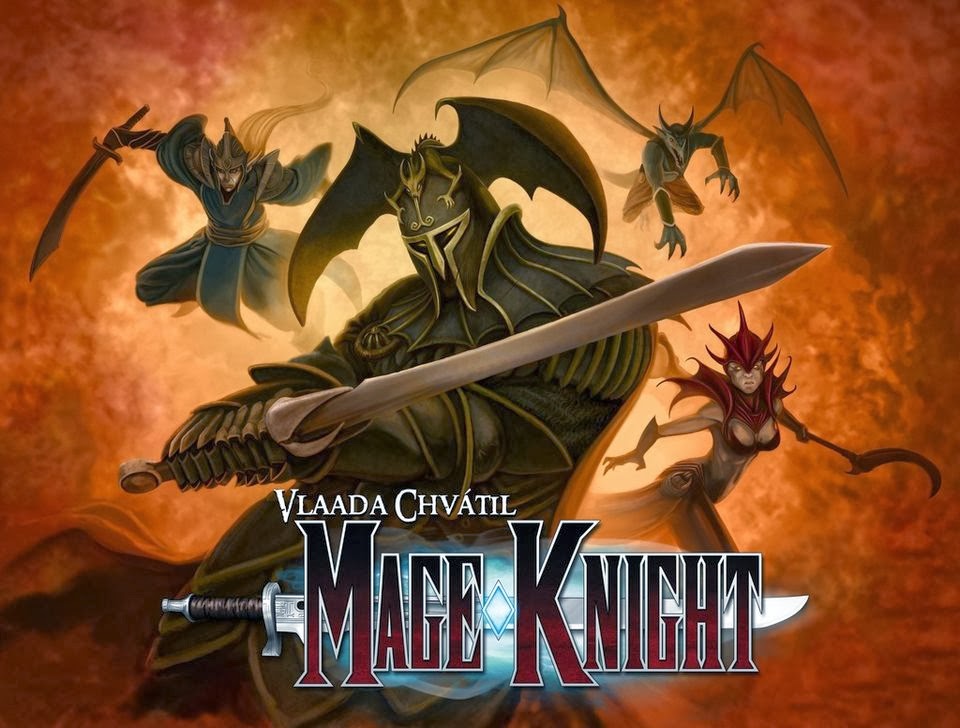 Honestly, whenever I try to explain to people how great Magic Realm is, I tell them that they just have to play it to understand.  If anyone is interested, here are my two previous posts about Magic Realm.

A Busy Day in the Caves of the Magic Realm

And if you'd like to read some really excellent posts that give a good overview of how the game is played, check out this blog: http://cmagoun.blogspot.com/
Posted by jrl755 at 8:08 PM No comments:

Here is a little reclamation project that I worked on over the weekend.  I started painting a long time ago (30+ years) when I was in junior high, and back then I wasn't very good.  Not that I'm claiming to be very good now, I was just much worse back then.  When I got back into painting bout twelve years ago, I had a lot of things to relearn, and painting skin was one of those things, so I practiced.  I practiced a lot.  The results ranged from bad to so-so.  Many of my early washed were to dark, and some of my priming jobs were bad as well, and these factors lead to some fairly disappointing paint jobs, but I kept practicing and got a bit better, and these days, I'm OK with most of my paint jobs.  Those earlier disappointing paint jobs however are still out there. I've thought about stripping them down and starting again, but that seems a bit extreme, so I decided to try to save a few, by repainting the worst parts and keeping the not-so-bad parts.  Here is my first example.


Overall, I think it's an improvement and now at least I have a miniature that I might use at the gaming table.  How does anyone else deal with disappointing paint jobs?  Do you start over, or do you try to fix what you've already done?  Just curious.
Posted by jrl755 at 10:31 PM 1 comment: 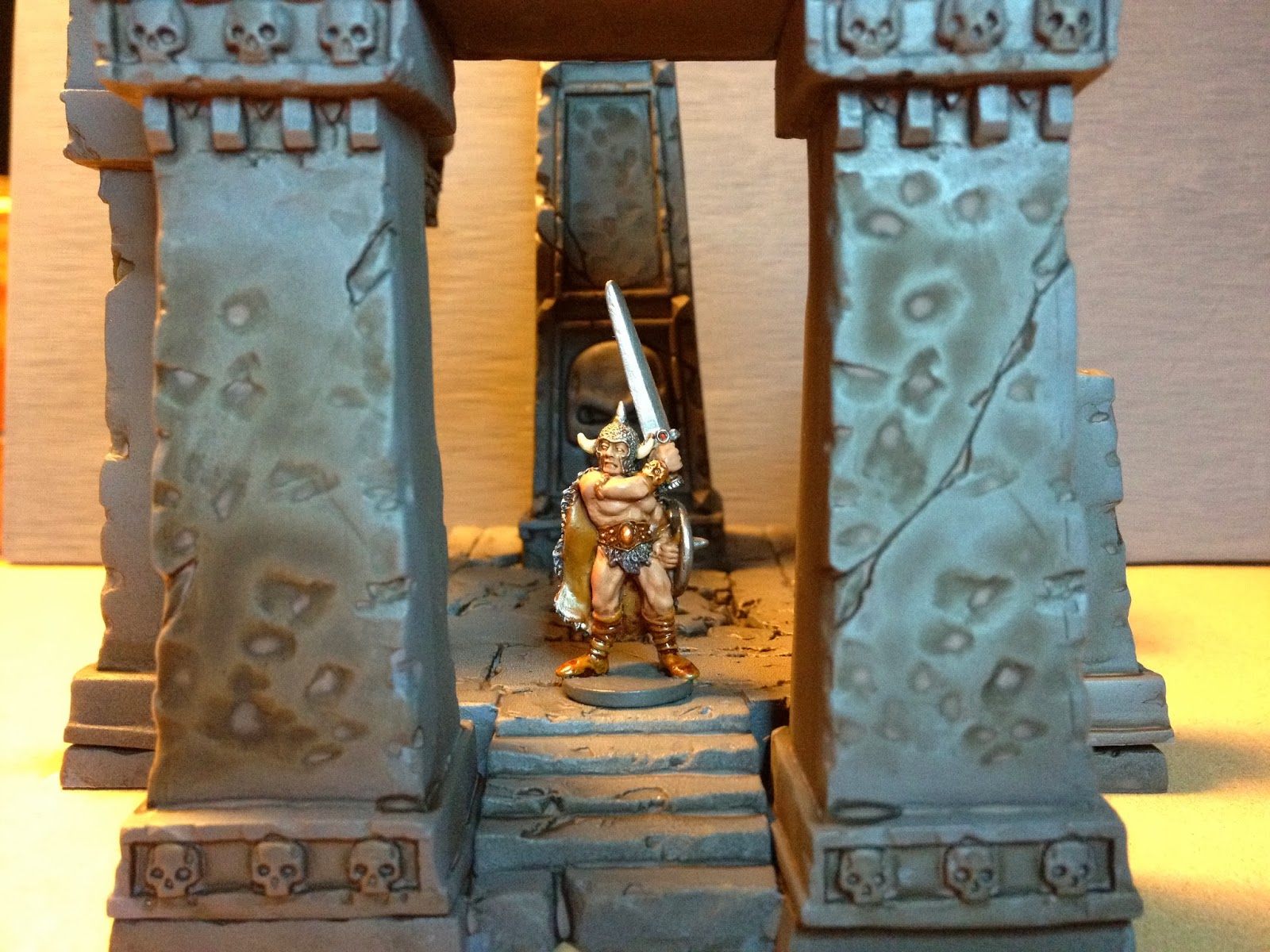 A barbarian warrior attempts to loot the Temple of the Skulls.  Will he survive to win the treasure, or will he meet his doom?
Posted by jrl755 at 11:23 PM No comments:

Journeys in the park

Here are some photos that I took on a winter walk around the lake in North Park. 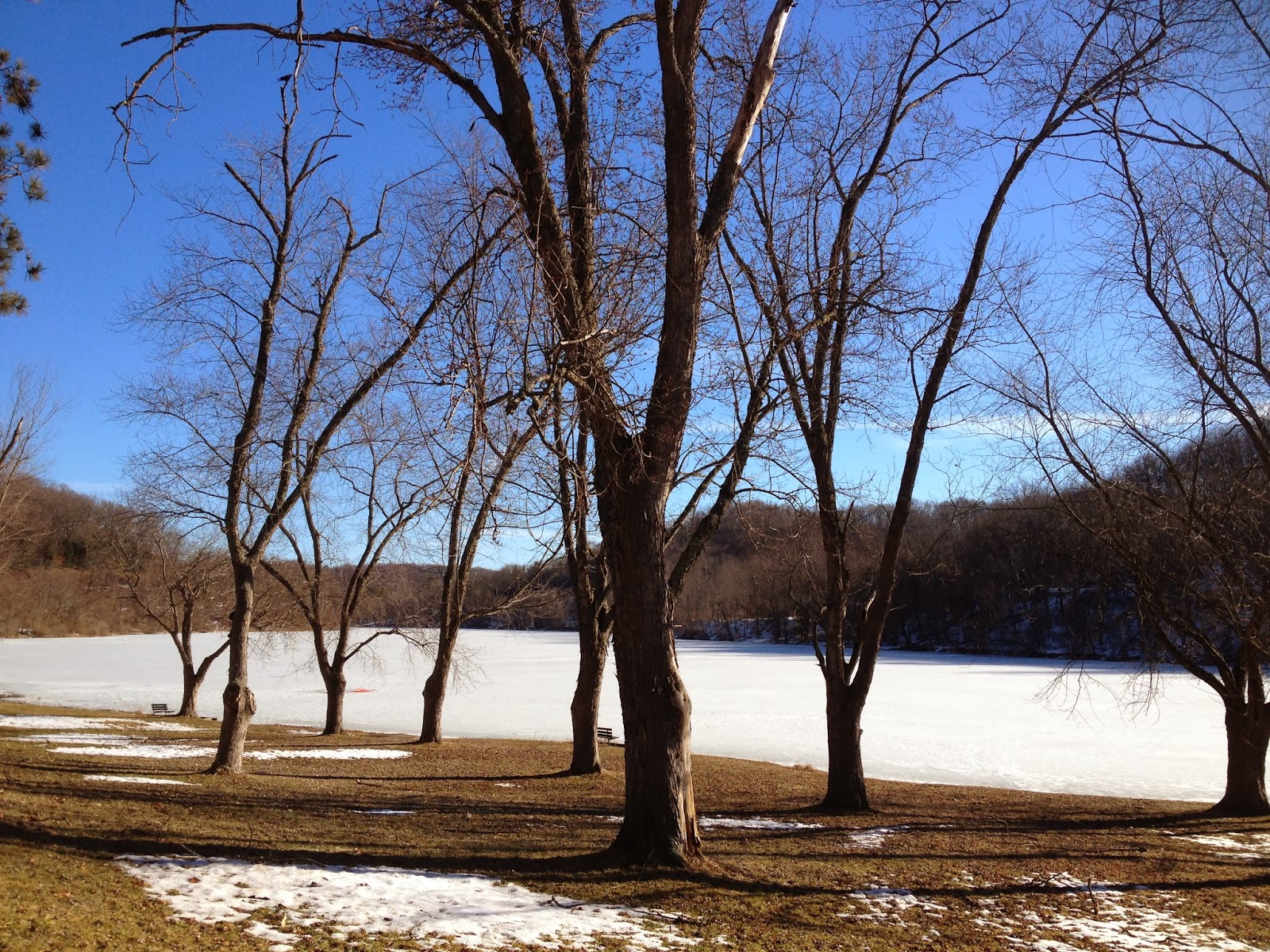 Despite the recent warm weather the lake is still frozen, but not so frozen that I would try to walk on it. :-) 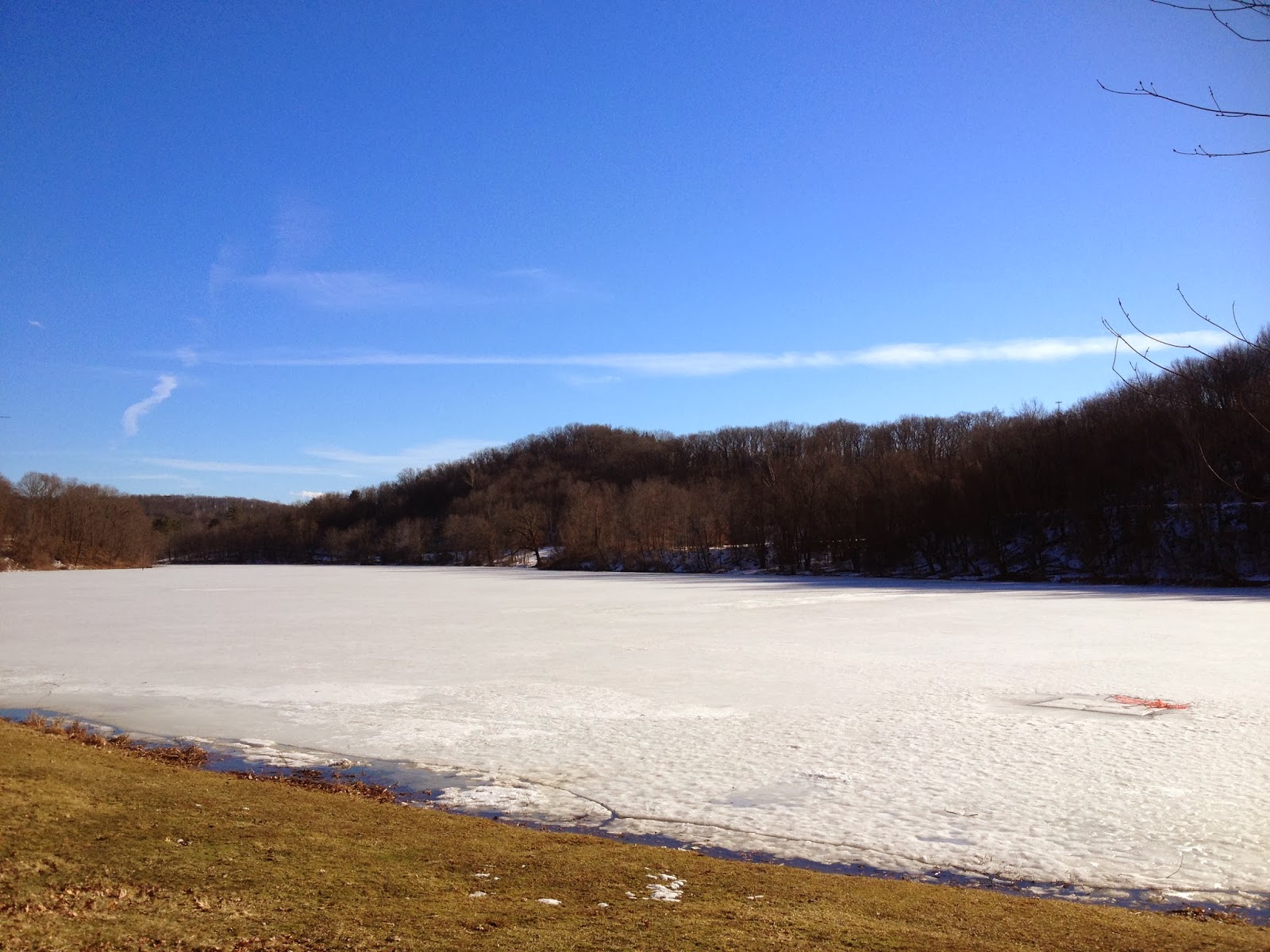 The sky was amazingly clear and blue.  I actually had to dig out my sunglasses for the walk! 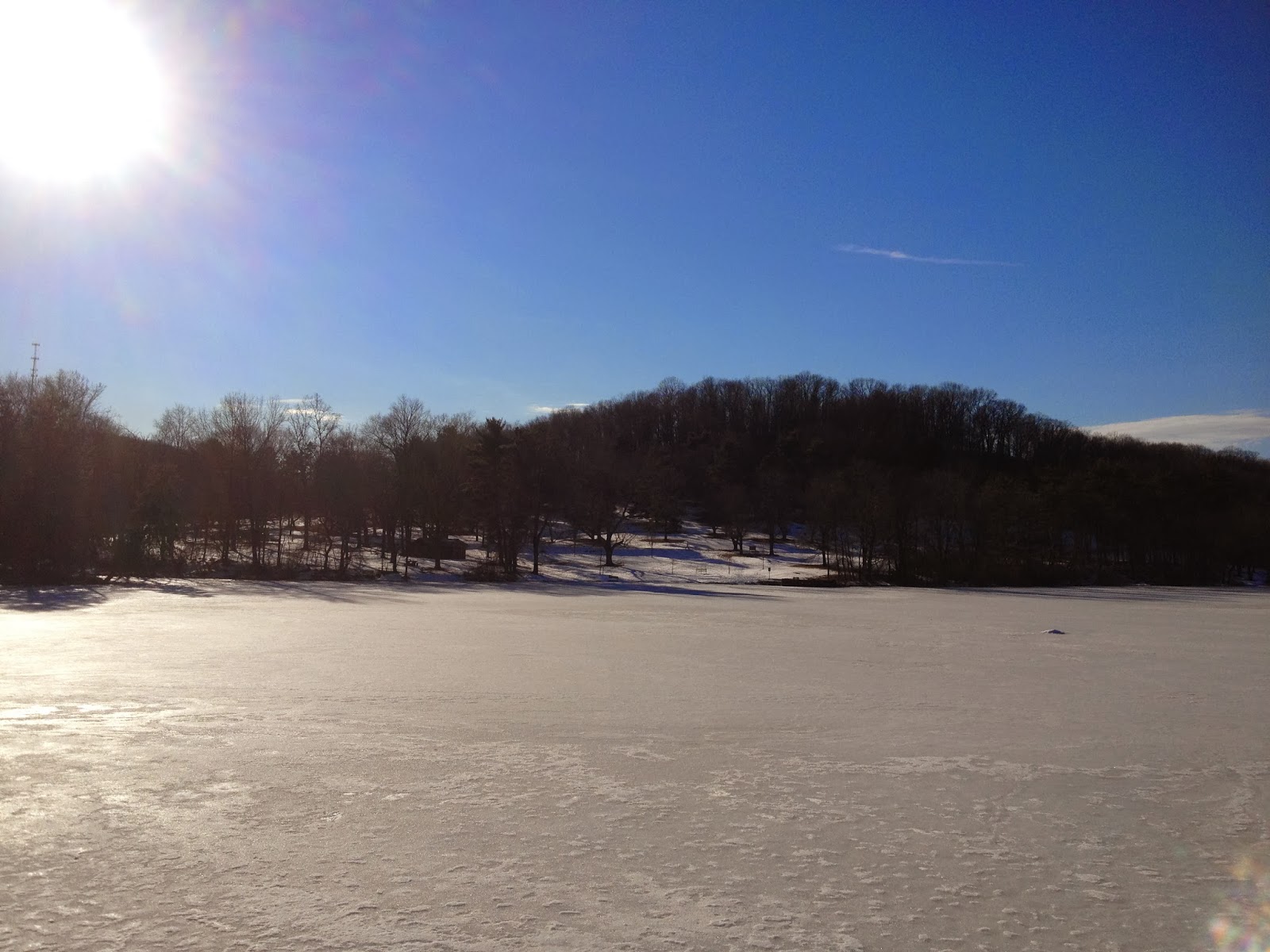 Looking from this angle, it looks much colder than it was.  In truth it was almost 60 degrees. 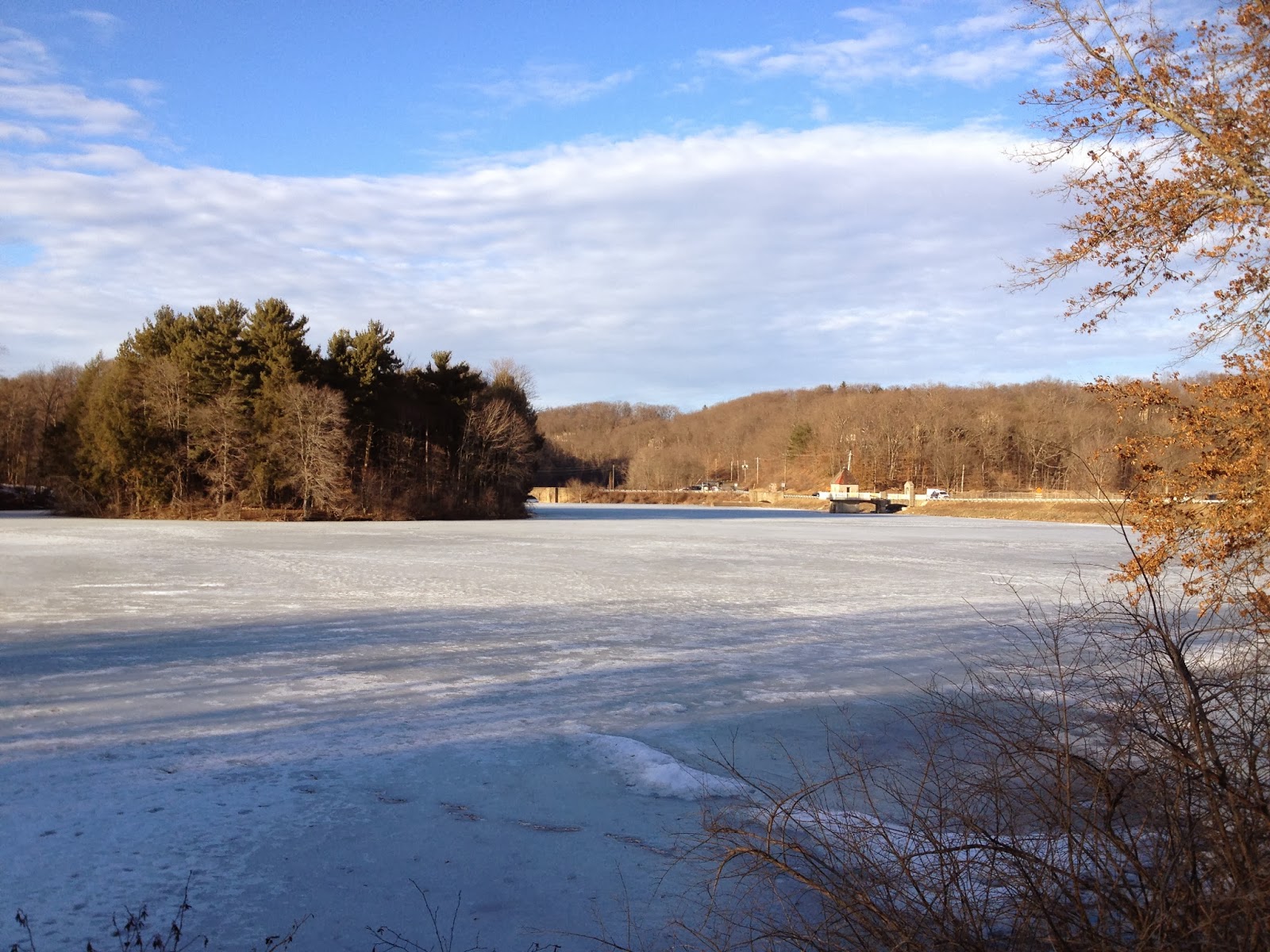 It's been many years since I've seen the lake this frozen. 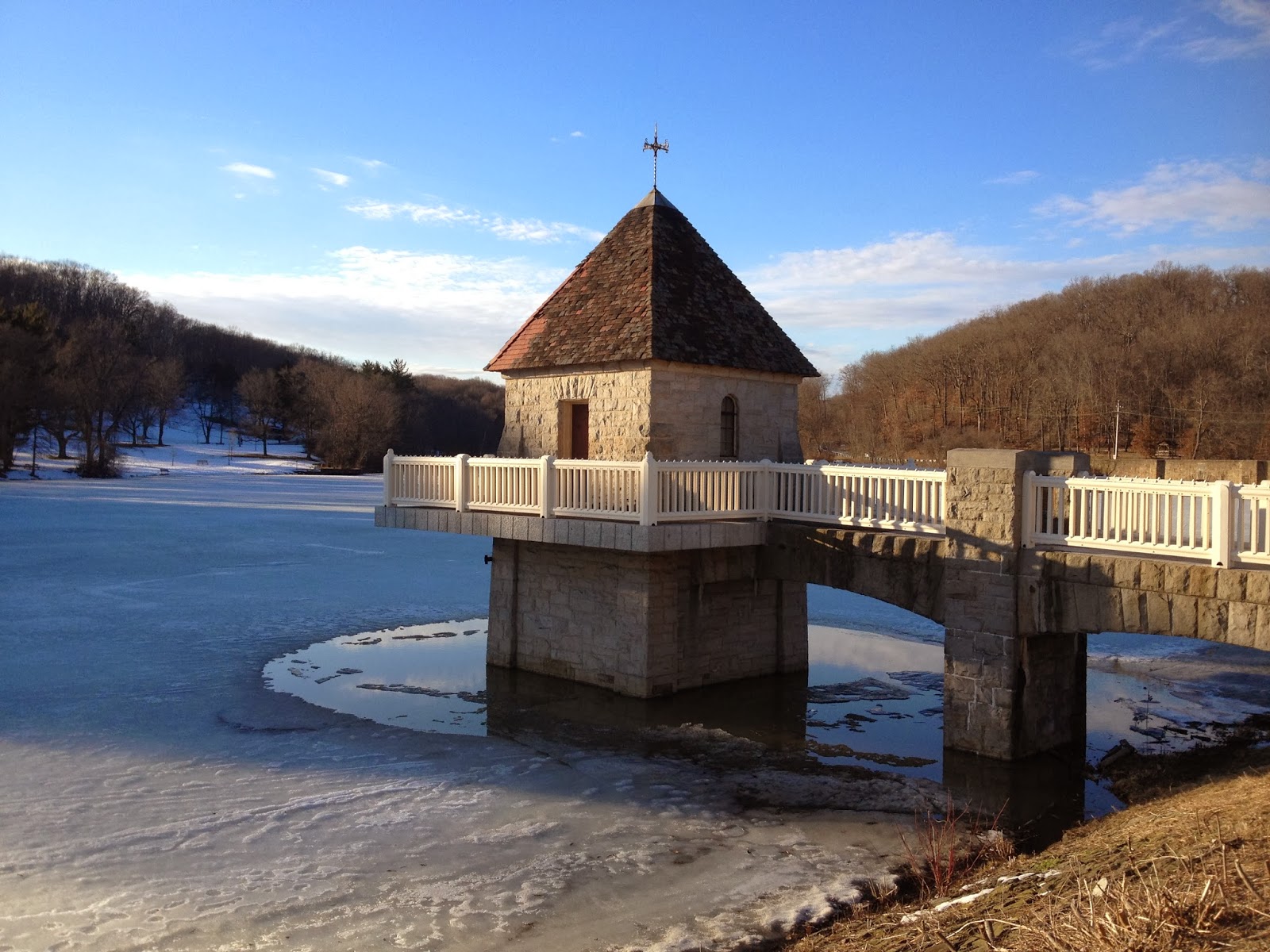 I'm never quite sure that this building is, but I've always thought that it was cool.  It looks like where The Wizard of the Lake should live. :-) 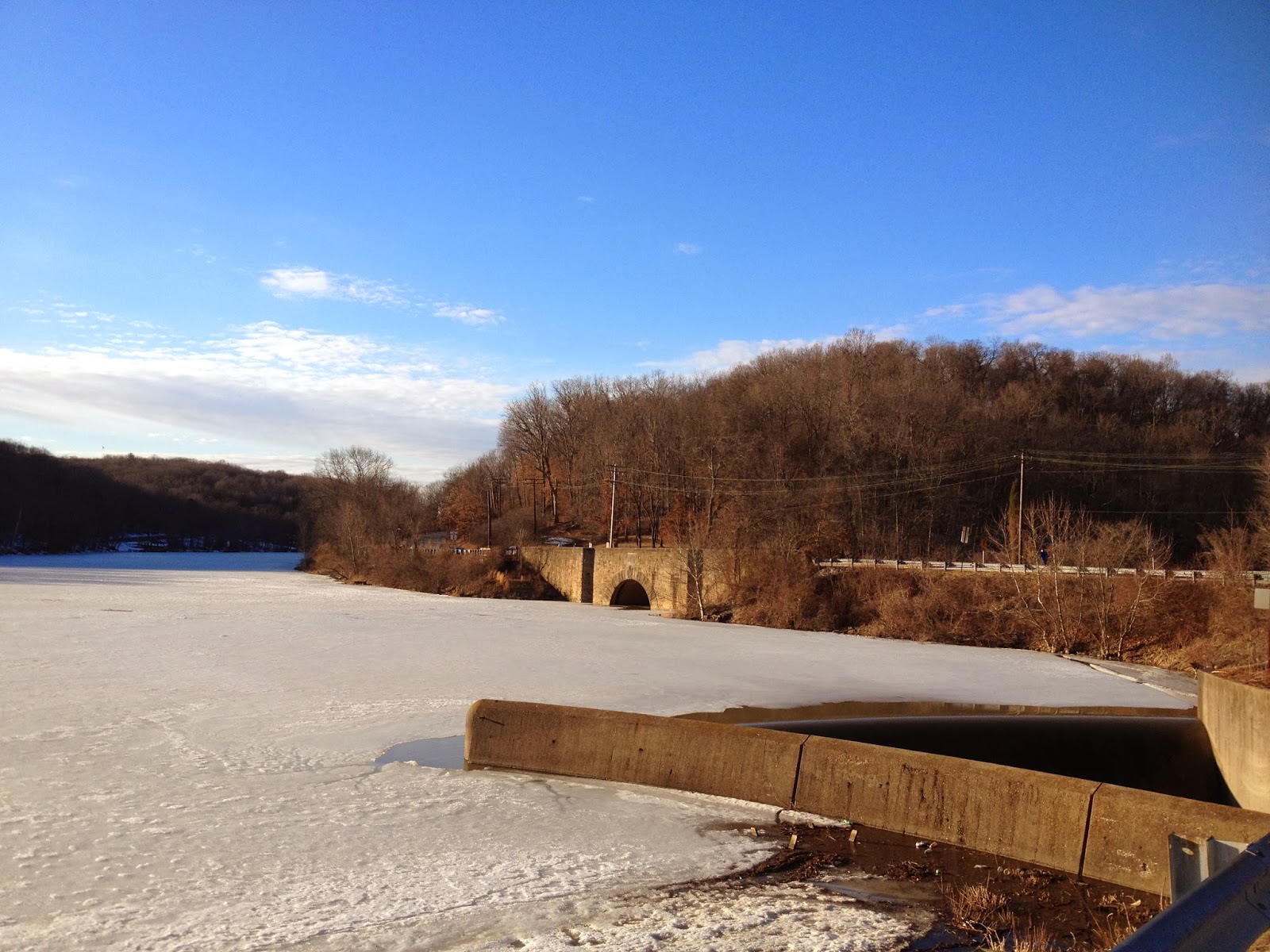 Here we can see the spillway leading out of North Park lake and the bridge.  There is a boat launching pond that you can reach by kayaking under the bridge.
Posted by jrl755 at 7:44 AM No comments: