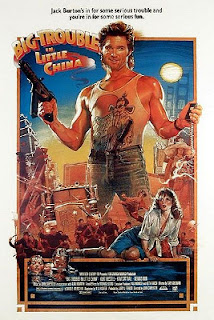 Thirty years ago today Big Trouble in Little China was released.  Sadly, it didn't do as well as John Carpenter had hoped.  Of course that was the same summer that Aliens came out, and that was a bit tough to compete with.  It's still one of my favorite films, but then I can see things no one else can see.  Why are you dressed like that? ;-)

Email ThisBlogThis!Share to TwitterShare to FacebookShare to Pinterest
Labels: Movies 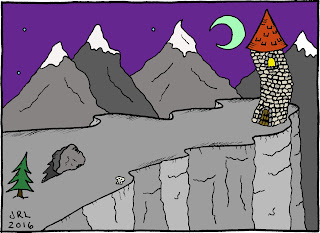 Shadows of the Silent Sorcerer
(Part 2)

Kurach was neither a man of great intellect nor of broad imagination.  To him death held no special terrors.  His gods offered nothing beyond the mortal world.  Death was the final end for all, and he had seen and caused much of it in his life.  His slow mind paused to consider that these men must have been placed here as a warning to any who would dare what he was about to try, for these lands were known to be under the eye of Mazrealas the Silent Sorcerer, who men said came without warning and vanished without trace, bringing only misery in his wake.  For years uncounted, it was said that Mazrealas had held sway over the people of these mountains, coming unseen to their villages and carrying off women and children to feed his ghoulish appetites.
Whatever crimes the Sorcerer had committed meant little to Kurach.  He believed that those who were oppressed were enslaved though their own weakness and deserved no better.  He cared nothing for the weak.  His people valued only strength and power.  The strong dominated and the weak served.  It was a simple and universal rule.  In any case, Kurach had not come to this inhospitable land as a savior, but as a thief.  His goal was a simple one, to relieve the Silent Sorcerer of some measure of his wealth and if necessary of his life.  Any improvement to the lives of the mountain folk would be incidental.  No doubt another would come to rule them should the sorcerer not survive this night
Kurach paused to inspect the weapons held by the skeletons but found them rusted and rotted beyond use.  Clearly they had been here for a very long time.  The fourth empty pole caught his attention.  It seemed newer than the others and showed no sign of having been occupied. Turning away from the grim scene, Kurach set out along the rocky trail, putting the unfortunate dead out of his mind.  In general he had little use for thinking.  He found that most problems could be solved with a sharp sword and a strong arm, and right now what thoughts he had were on the wealth that awaited him. A short time later, Kurach crouched behind a massive boulder in the deepening gloom, his sharp eyes surveying the goal of his long trek.  Before him the path ended at a sheer drop of unknown height, and built right at the edge of that deadly fall was the tower of the Silent Sorcerer.  However, built may have been an inaccurate description for the construction of the abode upon which Kurach gazed.  The building had the rough appearance of a tower, but one as might have been built by some insane giant throwing massive stones atop one another at wild angles with no concern for whether or not they would stand.  The tower seemed to have grown from the landscape like a warped stone sapling, bending out over the precipice then bending back inward like a broken finger.  A rough wooden door was set in the building's base, providing the only obvious entrance.  Doubtless, Kurach guessed that he could force that door, but whether or not he could do it without alerting the tower's inhabitants remained to be seen. Near the top of the bizarre edifice could be seen a rough window, little more than a jagged hole in the side of this ancient pile of stone.  From the window, Kurach could see the yellow glow of light.  The Silent Sorcerer was, it seemed, in residence this night.

Email ThisBlogThis!Share to TwitterShare to FacebookShare to Pinterest
Labels: Fiction, Shadows of the Silent Sorcerer, Writing 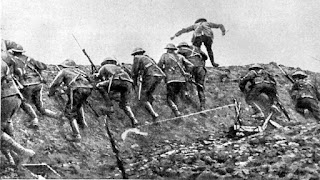 It's 7:28 BST (British Summer Time).  100 years ago it was two minute to zero hour, and the mines beneath the trenches of the German 2nd Army were detonated.  Two minutes later the British 3rd and 4th Armies along with the French 6th Army went "over the top".  It was the worst day in the history of the British Army.  The British 4th Army suffered 57,470 casualties that day, of which 19,240 were killed.  When the battle ended over four months later, the Allies has lost 623,907 men of which 146,431 were killed or missing. had taken.  The Central Powers had taken around 465,000 casualties, of which 164,055 were killed or missing.  Those number are mind boggling, all for a few miles of blasted land.  The British are observing two minutes of silence at 7:28 BST to honor all of those who were forever silenced on that day.

Email ThisBlogThis!Share to TwitterShare to FacebookShare to Pinterest
Labels: History 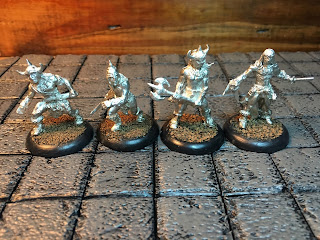 Following up on my recent post about the upcoming release of five Death Dealer Miniatures by Bronze Age Miniatures, I figured that I would post some photos of four barbarian miniatures from them that I just finished assembling.  They make some very cool miniatures, and these have a definite Frazetta vibe to them.  I'm really looking forward to painting these guys and getting them on the table.  About the only downside to these guys is that they don't ship with bases, so you'll have to provide your own.  Standard slotted bases work fine.
Posted by jrl755 at 4:02 PM No comments: Links to this post

On a pleasant morning you are confronted by a drunken wizard at a fork in the road.  The wizard tells you an intriguing tale that 6 days journey to the west, beneath The Puzzling Burial Ground of Nightmares lies the Flooded Crypt of the Hands.  Legends hold that there can be found The Emerald Flask of Midnight.  But beware, for the wizard warns you that The Barbarous Phantasm of Bones dwells there!

I'm a huge fan of Frank Frazetta, particularly his Conan and Death Dealer paintings.  So I was really excite to learn that Bronze Age Miniatures, who have always made some pretty cool Frazetta inspired figure, is releasing a line of five 32mm Death Dealer Miniatures.  The expected  release date for these is 11 July 2016, and I have to say that they look pretty good.  They range between $15 and $25 each, but based on my past experience with Bronze Age, they will be worth it.  It goes without saying that I've already pre-ordered mine.
Posted by jrl755 at 7:03 PM No comments: Links to this post 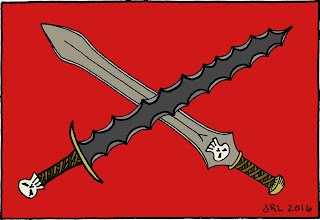 This week's Random Table is a d100 table of magic swords.  As with most of my random tables, these weapons don't have stats, but who wouldn't have fun making up stats for the Blessed Basalt Sword of Offenses?  These are intended as ideas to get your creative juices flowing.  Also as usual, these mostly sound as if they are cursed. :-)

This week for Miniature's Monday, we return to the Iron Kingdoms.  I painted this miniature for the Gun Mage in our current IK campaign.  Overall I think that it turned out rather well, but it started out a bit rough.  There is a lot of small detail on this one, and my eyes aren't getting any younger.  I also tried experimenting with a different photographic background, but I'm still not sure what I think of it. The miniature is an official Iron Kingdoms miniature from the Hordes line and is available from Privateer Press for $9.99.
Posted by jrl755 at 6:47 AM No comments: Links to this post