I've always been a big fan of lizardmen.  When I first started playing D&D back in the stone ages, I always wanted to play one, and when I ran games, they frequently appeared as antagonists.  So of course, I've always been a big fan of lizardman miniatures.  Reaper Miniatures makes some great sculpts, but I've always been a bit disappointed with the selection of weaponry their lizardmen come with.  They tend to have a lot of clubs and things that while dangerous, just don't look that impressive.  Now I get it, they are stone age savages who live in swamps where metal would rust pretty quickly, but I want my lizardmen to be cunning and crafty.  I expect that they will actually use the weapons that they acquire from slaughtering hapless merchants and unlucky adventurers.  So I set about modifying this set of lizardmen (DHL Classics Lizardmen II available from Reaper for $11.99) to better match my vision.  Let's take a look at the the original minis.
Now, these are look pretty tough, and I certainly wouldn't want to run into any of them in a dark swamp, but I want my lizardmen to be more elite.  The fellow on the left has a stone sword, which I actually think is pretty cool.  Some effort must have gone into making that, and it's probably some sort of lizardman heirloom, possibly carved from a mysterious stone found by his grandsire deep in the swamp.  I like the look of that one, so I've left him alone.
Next, the fellow in the center has a rather wicked looking maul made from a spiky stone tied to a big stick.  While I sure wouldn't want to get hit with that, I think that we can do better, so I replaced it with a big curved two-handed sword.
Finally, we come to the fellow on the right.  This guy has a bunch of skulls around his neck and appears to be rather important, but for a weapon he's carrying...a bone.  Honestly, were they on their way to raid a village when he noticed that he had forgotten his weapon?  Did he stop by the rubbish heap and just grab a dead adventurer's femur?  I decided that he really needed an upgrade and replaced his bone with a wicked looking barbarian sword.
So now we have my upgraded lizardman raiding party.
The modification weren't hard, and my new mini craft drill made the work much easier.  I'm pretty pleased with how these modification turned out, and can't wait to get started painting them.  So what do you think, do you prefer your lizardmen to have stone aged weapons or more modern weapons?
Posted by jrl755 at 9:07 AM No comments:

I'm not sure how I missed this, but Games Workshop is releasing a new version of Warhammer Quest this month!  Of course it costs $150, and it's one of their limited runs, but still it's nice to see them using some of their older popular properties.  Plus, if Space Hulk is any indication, it won't be the last time we see it.  I've grown rather disenchanted with GW over the years, but this certainly makes me think, even though it doesn't look as fancy as the original. 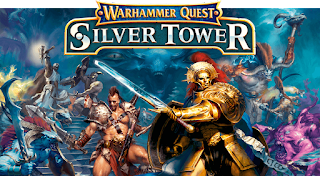 Email ThisBlogThis!Share to TwitterShare to FacebookShare to Pinterest
Labels: Board Games

This week for Miniatures Monday, we have a dual wielding northern warrior.  It's not among my best work, but I've done a bit of touchup here and there to get it to the point where I'm happy enough with it.  My attempts at painting black hair tend to meet with rather mixed results.  The miniatures is Dantrag, Northern Adventurer, and is still available from Reaper Miniatures for $6.99. 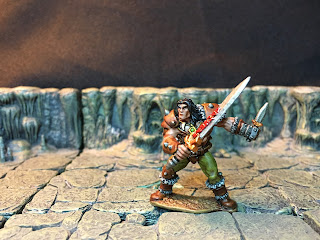