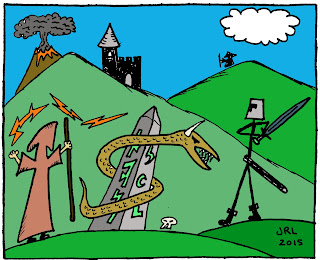 In honor of Free RPG Day, I'm reposting a link to my free 1,001 More Weird and Wacky Adventure Ideas, a collection of adventure seeds that are in many cases just plain weird.  I figure that not everyone has access to somewhere that is participating in Free RPG Day, and those folks should't miss out on getting something free, even if it is kind of crappy. :-)

I hope that people find as much enjoyment from reading and using this as I had creating it.  Happy Adventuring!

Also, don't forget to check back at this blog every Wednesday for a new adventure idea on Weird Adventure Wednesday. :-)
Posted by jrl755 at 12:31 PM No comments:

Those of you born after the mid 1980s may find it hard to believe, but back in the 1980s the Commodore 64 was a pretty awesome gaming machine.  One of my friends had a cousin in the Air Force who was stationed in Greenland or some such place and had a C-64 with him there.  I guess it was to fight the Russians with, but who knows?  It seems the there wasn't much to do in Greenland though what with all the ice and such, so they played a lot of computer games up there, most of them pirated.  This piracy benefited the American homeland though because several times a year, a shoebox filled with 5.25" floppy disks would arrive at my friend's house.  Each of these disks would be crammed full of games.  Many a Friday night (when we weren't playing Dungeons and Dragons) was spent with four of us huddled around my friend's Commodore 64 trying out all of these wondrous new games.  Of course we had no instructions for any of them, so beyond any on screen clues we may have had we were on our own as far as figuring out how to play.

One of the games that arrived was a game from the impressively named software company ULTIMATE PLAY THE GAME called The Staff of Karnath.  It was an isometric side-scroller where you played some sort of wizard in a castle trying to collect the pieces of a magical pentacle.  You had a number of spells with names like Forthrin and Umphalos, all of which seemed to shoot the same missile out of your hands.  Of course the spells all did something different, and this was no doubt done to thwart potential pirates.  Cough, cough.  The castle was full of all sorts of enemies such was suits of animated armor, witches on brooms, a troll, a floating skull, some weird hopping guy, and many others.  We died a lot, and we only ever figured out that the Forthin spell was the main attack spell.  Beyond that the mystic arts eluded us.  In any case, we played this game a lot without ever getting anywhere, but that didn't really diminish the fun, rather it increased it.
The joy of discovery when we figured out how to play one of these mysterious games (many of which we had never heard of before), was huge.  Those were some good times, and those games, while simplistic by today's standards were still pretty awesome.  The Commodore 64 has passed into history, but it will always have a special place in my heart.  As an aside, I came across a long-play video of the Staff of Karnath on youtube and have included it here in case anyone is interested. 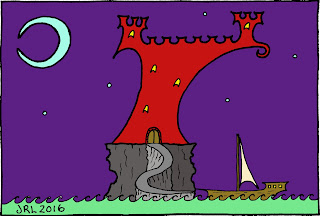 On a steamy day you have a chance meeting with a middle aged entertainer at a gladiator fight.  The entertainer tells you that 2 weeks journey to the west, across The Boiling Sea of Contaminated Mouths lay The Forgotten Island of the Crimson Tower.  It is rumored that there can be found The Chattering Quartz Girdle of the Witch.  But beware, for the entertainer counsels you that The Chelonian Witch of Cannibalism slaughters all who set foot there!
Posted by jrl755 at 6:40 AM No comments: 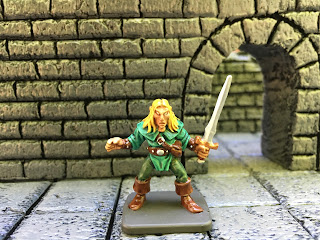 In a bit of a change from the metal miniatures that I normally paint, this week we have a very old miniature molded in plastic.  This is the elf from the 1990 Milton Bradley edition of HeroQuest.  For those of you who might not be familiar, HeroQuest was a dungeon crawling board game that was a joint effort between Games Workshop and Milton Bradley.  It was played by played by up to four players and a referee.  Imagine an older simpler version of Descent: Journeys in the Dark.  There were four available characters in the base game, the elf, the dwarf, the barbarian, and the wizard.  The casts are fairly simplistic, but I thought that it would be fun to paint them, and they will certainly look better on the board.
Posted by jrl755 at 6:25 AM No comments:

A Grim World of Perilous Adventure.

Heavy metal orcs, punk rock elves, chaos, mutation, and madness.  What's not to love?  Ever since I picked up a copy of the first edition rules to Warhammer Fantasy Roleplay at Phantom of the Attic back in 1989, I've been hooked. 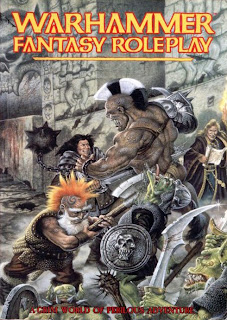 I loved the cover of the first edition.  The image was so evocative and so not D&D.  Trolls and dwarves with mohawks, goblins who looked like they would eat you as well as kill you.  This looked like my kind of game.  I loved the character creation and the fact that you could start as a rat catcher with a stick and some dead rats or some other equally ridiculous and potentially doomed career.  The second edition cleaned up a bit of the game and produced a large quantity of supplements, while still holding onto the feel of the game.  Sadly, the third edition just didn't do it for me.  All of the fiddly pieces just seemed unnecessary, and in fact turned out to be when they published the hardcover books which included rules for not using them.  Still, it just didn't feel right to me, so I sold off my third edition gear.  In any event, I kept first and second edition books and still turn to them frequently when I need some inspiration.  I would like to see an updated edition someday though that returns more to the system's roots, but we shall see.
Posted by jrl755 at 11:53 AM No comments: