Look what has arrived from new Zealand! These are latest miniatures from Star Hat Miniatures.  Another great set from +Darcy Perry I still need to assemble the troll. 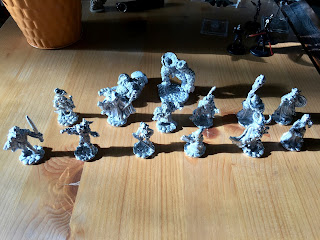 I'm so very far behind on painting that I'm note sure when I will get around to these, but I've singled out three for priority painting! 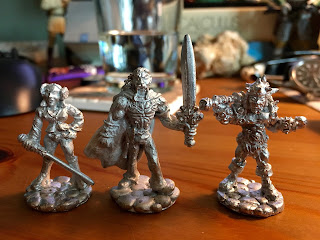 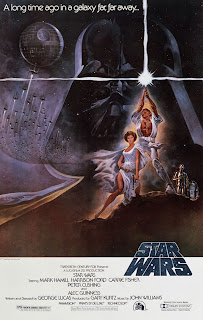 Wow.  It's hard for me to believe that Star Wars is 40 years old today.  I was 7 1/2 when it was released, and I was already a fan of science fiction and fantasy films.  I loved the Buster Crabbe Flash Gordon serials that our CBS affiliate would run as filler for movies that didn't cover their entire time slot.  I watched Star Trek reruns on Sunday afternoons, because football was boring.  I was glued to the TV on Saturday afternoons to watch hokey sci-fi films from the 1950s.  Monsters in rubber suits and ray guns that fired sparks were kind of my thing, but none of that prepared me for what I saw when my parents took me to see Star Wars.  It was awe inspiring.  I'd never seen anything like it before.  My imagination didn't need to fill in the blanks created by poor special effect and black and white film stock.  It was all there on the screen, and it looked real!
As great as the film was, there was still another surprise waiting for us in the autumn of that year.  The toys.  My friend Keith had pre-ordered the first set of action figures, and I remember him brining them in to school in second grade.  They were the coolest toys ever, but of course, nobody wanted to get stuck with the droids! :-)  My own collection of toys started soon after.  I had 4 Boba Fetts from sending in proof of purchase labels from other action figures.  I had an X-Wing and lost the clear canopy somewhere.  I had Darth Vader's tie fighter, and like everyone else, I struggled to keep its wings on.  I had the Death Star, and I can't count the number of times that Boba Fett and his three clones shoved farm boy Luke into that trash compactor.  I spent hours recreating the movies and making up my own Star Wars stories.  Those were great times, indeed.
More films followed.  The Empire Strikes Back was a thing of beauty, even better than the original.  Return of the Jedi was a little bit of a letdown though.  I was almost 14 by that time, and the Ewoks just weren't cool to me.  Star Wars had begun to lose a bit of its magic I guess as I got older.  Other things were just cooler to a teenager I guess, but fortunately, that didn't last.  Somewhere along the line, in college, I managed to recapture what I loved about Star Wars, and I'm a fan to this day.  I doubt that many people would have predicted that 40 years later we would still be getting new Star Wars films, or that there would still be Star Wars action figures on my desk.  The later films of course have been a mixed bag, some good, some less so.  But when I hear that John Williams score, I'm reminded that even a so-so Star Wars film is still Star Wars. 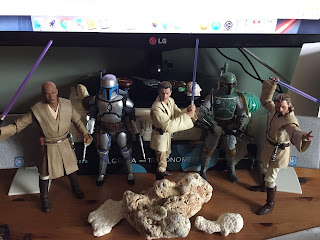 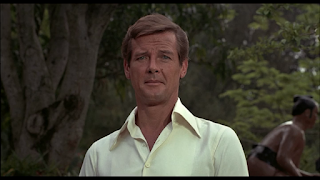 He was never my favorite Bond, but it's difficult to deny his charm.  Though it often ranks as one of the lesser Bond films, I'll always admit The Man With the Golden Gun as a guilty pleasure.  I know what I'm watching tonight.
Posted by jrl755 at 9:22 PM No comments: