I tend to think that his should be an automatic success. 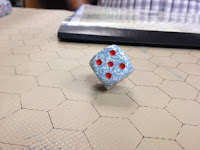 A few weeks ago, in our Iron Kingdoms campaign, my friend Dan made what I think was a spectacular roll.  When the GM asked for a d6 roll, Dan's die came up corner "corner".  There is no trickery in these photos, the die actually landed and stayed on it's corner.  Indeed one of the craziest rolls that I've seen on my 35+ years of gaming.  Does anyone else have photos of wacky or improbable die rolls? 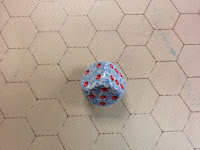 Some Film Inspiration for your Dungeon Crawling Enjoyment 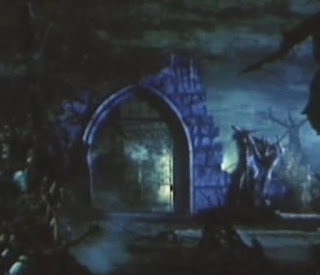 Several years ago, I came across a lesser known German horror film from 1967 luridly entitled The Torture Chamber of Dr. Sadism.  As it starred Christoper Lee, and as I am a notorious sucker for bad horror flicks, I was of course obliged to watch it.  While the film falls squarely into the realm of gothic horror, I found that it provides great dungeon crawl inspiration as well.  Let's start with the characters who feel almost as if they were rolled up from a Dungeon Crawl Classics zero level table.  We have a Nobleman, a music teacher, a priest/highwayman, and a serving girl.  These three embark upon an overland journey by carriage to a mysterious castle which is said to be ruined, and about which the locals refuse to speak.  Their journey takes them through a phantasmagoric landscape of blood red skies and a forest where human limbs sprout from the trees, and dead bodies line the roadway.  Upon arriving at the castle they find that much like many classic dungeons, it turns out to be a ruin where only the dungeons below remain.  Descending into the dungeon, the heroes find themselves in a maze of twisting passages filled with secret door and falling portcullises.  Disturbing frescoes festoon the walls, and skulls abound.  The characters are obliged to explore this underworld by torchlight and encounter things like huge buzzards, a zombie, and an axe wielding vampire along with a multitude of deadly traps.  A pit trap opens beneath one of the daring explorers.  A sleep gas trap knocks a character out.  A retracting walkway threatens to drop one of the characters into a pit filled with poisonous serpents.  Now all of these things don't make for a great movie, and the ending is a bit unsatisfying, but the set design is great and it really got me in the mood to do some dungeon designing.  For those interested in checking it out, the film is currently available on Amazon Video, and it's free to Amazon Prime members.
Posted by jrl755 at 6:46 PM No comments: Links to this post